Ever heard of The Vendy Awards? It’s the Oscar Awards for street food vendors, or as they like to be called, “New York City Sidewalk Chefs.” Pretty smooth spin on ‘hot dogs.’ 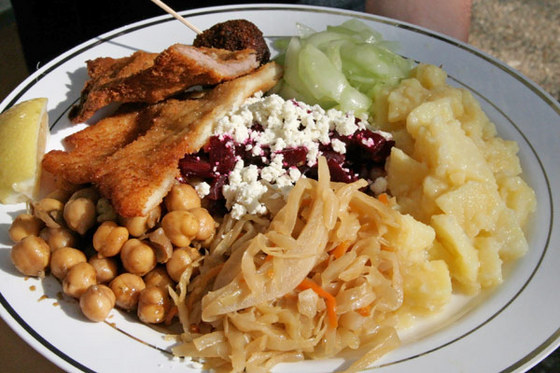 Yep, once a year an annual competition is held to find the Best Street Food Vendor in the city. The $100-per-ticket admission goes to support the Street Vendor Project of the Urban Justice Center, a non-profit that provides a voice for the 10,000+ who sell food and merchandise on the streets of New York.

The winners for last years included “99% Vegetarian” a vendor whose cuisine is described as old-school hippie. Soy, bulgur-studded burger patty with a charred crust, a side of pinto beans, curried-out tofu scramble, and faux chiken hunks. The photo looks a whole lot more appetizing than the words describing it.

Then there’s ‘Mexicue.’ Did I read that right? He sounds like Mexican with a Southern accent. But instead it’s beet tacos, yes beets. They are diced and topped with a creamy goat chees and peppery watercress, wrapped in a light flour tortilla. Wow, sounds like something you’d order in a white-tablecloth high-falootin’ joint.

The next winner was ‘Cinnamon Snail.’ He served up grilled tofu over mashed yams with a side of mango salsa, spicy pecans, and friend ginger. Finish that off with chocolate ganache-stuffed s’mores doughnuts topped with graham cracker bits and bobs. Tell me that doesn’t sound delish!

And the list goes on. ‘Patacón Pisao’ won for his patacón sandwich made with fried green plantains that are squashed flat and pounded thin and filled with shredded beef or chicken. Growing up eating Latin American food, I LOVE the sound of this dish.

Last but not least, I’ll mention ‘The Big Gay Ice Cream Truck’ who won because of his Salty Pimp. It’s a cone of soft-serve vanilla ice cream drizzled with crunchy sea salt, then dipped in chocolate. Not only should he have won first place for his sweet+salty creation, but the name of his dessert deserved the blue ribbon.

{ take a minute to peruse the photos }

You see, most of these food vendors are immigrants, small business men and women who come to this country not speaking a word of English. One of the few ways they know to make a living is by selling their home-cookin’ cuisine on the streets of New York City. And man, aren’t we lucky to have them!