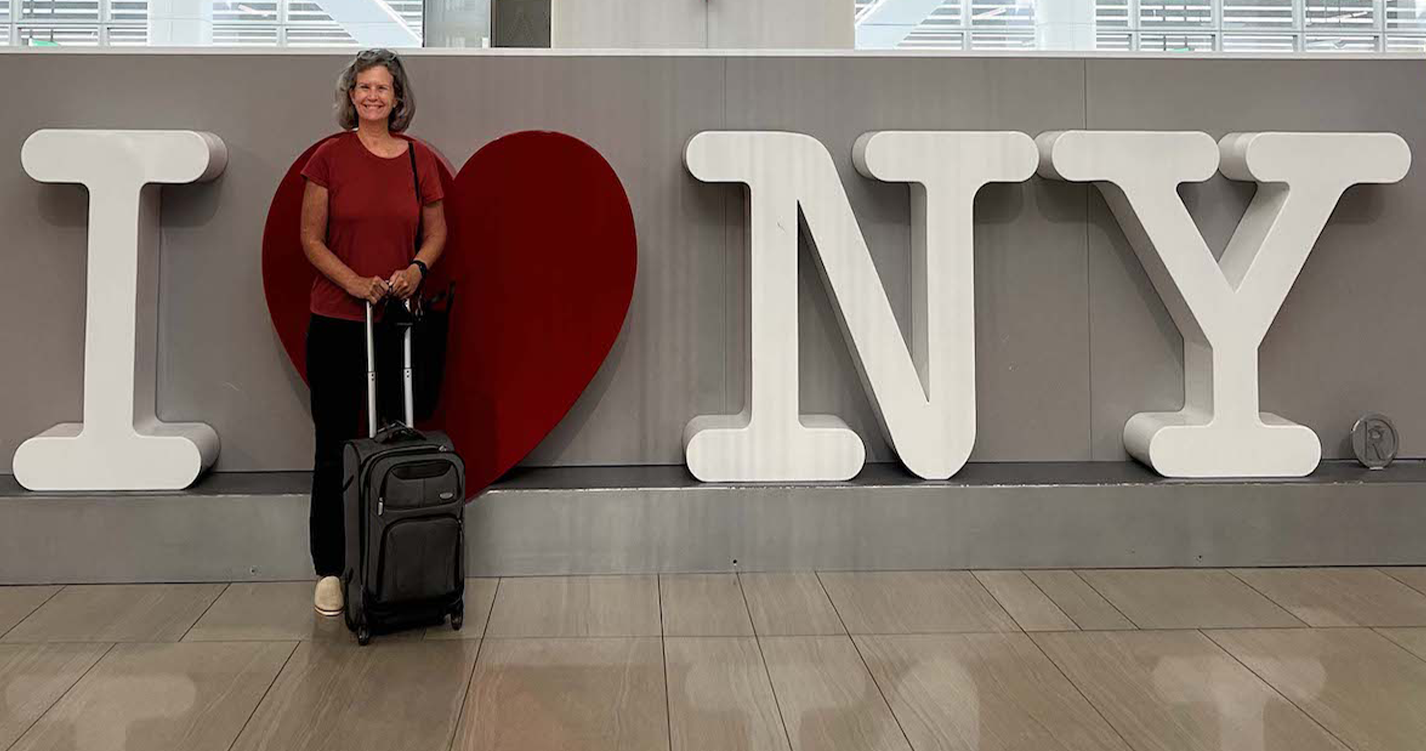 Just after our plane touched down, the flight attendant announced, “Welcome to the greatest city on the planet!” I grinned big ’cause I couldn’t agree more. I deplaned into a brand new, sparkling terminal at LaGuardia and, of course, asked a young woman to take my photo. Yes, cheesy!

I did my usual and hopped on the Q70 bus. I squeezed my butt between two bulbous and sweaty bodies, and off we sped toward the closest subway station, the one at Roosevelt Avenue.

Once there and before entering the station, I veered off a few blocks, hunting for the tamale lady, the one who, for so many of my trips, sold her delicacies from an old rusted grocery cart. Two dollars got you one of the most authentic and delicious pork or chicken tamales you’ve ever put in your mouth. I couldn’t find her on my last trip so I assumed COVID shut her down. Unfortunately, I couldn’t find her on this trip either and I’m bummed.

Once in the subway station, I lugged my suitcase down two sets of nasty steps to the platform where I waited for the L train, for a 30-minute ride to my stop in the West Village. At my destination, I hoisted my roller bag back up two flights of stairs onto 14th Street, then maneuvered us both through the uneven cobblestone streets of the Meatpacking District.

Oh, the place was bustling! Tons of young women and men fashionably dressed. All vibrant and successful-looking. It was the weekend and the energy was electric. So was my heart. I was back home.

The West Village is where my book is based, when in 2011, I spent 30 days walking the city. As those who’ve read my book know, I rented a small Airbnb on Perry Street. Yes, the same street where the TV series Friends was shot. This became my familiar, my home. And each time I come back to the city, this is the area where I start.

And I stay at the only hotel in the West Village, The Jane Hotel, which is a bit quirky, and not for everyone. You see, its tiny little rooms are only 50 square feet, yes… that’s what I said. Tiny. And the bathrooms are down the hall. Why do I stay here? Back nine years ago, the first time there, I unlocked the door to step out of the communal shower and was greeted by the most handsome guy, tall and with a gorgeous Australian accent. Oh, maybe 25 years old. I’ve been coming back to this hotel ever since. 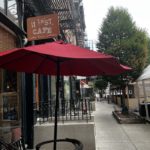 I have a ritual of sorts. On my first morning in the city, I walk over a few blocks to the 11th Street Cafe, just a couple of streets south of the hotel. There I order the same thing, year after year. Stone-ground oatmeal topped with bananas, walnuts, bits of ginger, dried cranberries, and brown sugar… and a cup of coffee. Once finished with my oatmeal, I take my coffee and walk two blocks over to the Hudson Riverpark.

There I sit and thank the good Lord for allowing me yet another snippet of time in this city that I love so much.

This morning, I watched the joggers and rollerbladers go by, the stroller-pushing moms, and the ambling old folks, and I reflected on the ten years I’ve repeated this same routine. It never gets old, I never tire of the hassles of this city, or the sights or sounds or even the smells – which aren’t the freshest. I choke up even writing this. 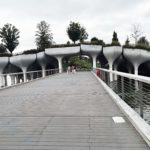 I then walked over to a fairly new creation, The Little Island. I remember being here when it was just an idea posted on a construction sign. Over five years, I came back and watched it rise out of the Hudson River.

As you enter the park, there is a small area of nine brass plates in the sidewalk, each one emitting a different sound when stepped on. I sat and watched as a man walked, inadvertently stepping on it, and a “ting” rang out. He looked back, curiously, to see where the sound came from. He then stepped on another one, but then looked around and decided to walk on because onlookers were watching him. You know the moment, “No, I need to stay cool.” One of the onlookers walked over to it and pointed the tip of her shoe on to one of the squares and no sound came. She then tried another square and it produced a deep “DONG!” She too looked up at those staring at her and decided to keep going. Finally, a young father and mother pushing a stroller came closer. The dad stepped on one and a tone rung out. He stepped on another, then another until he had a little tune going! CLICK TO WATCH. Watch the child’s feet, flailing in delight. Kuddos to that dad! He brought us all a smile.

These are the little special scenarios that absolutely delight me, and continue to lure me to this wonderful city.

I’m beat. It’s been a long, long day. I’m off to the Heights, the northernmost part of the island where I will live for the next two weeks. I am cat-sitting for a wonderful couple while they go on vacation. But before you log off, I’d  love to share two bits of interesting info:

In 1912, 710 survivors of the Titanic were rescued by a passenger ship “Carpathia” and brought to the spot where this “Little Park” now stands. Many of them were housed in the American Seaman’s Friend Society Sailors’ Home and Institute, now known as The Jane Hotel.

And, before you go, read the history of the 11th Street Cafe:  CLICK HERE