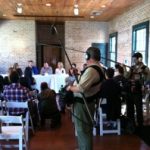 In the three days that we’ve been here we’ve sat in the finest of the city’s boardrooms. We’ve watched basketball from best box in the New Orleans Arena. We’ve dined on rooftops at sunset, overlooking the city at its best.

The city’s top leaders have been with us almost 24/7, making sure we’ve heard the right stuff, the success stories. We’ve been ushered around the city to visit businesses of those who have made it big. We’ve heard over and over again from those business owners taking advantage of the 35% and 50% tax incentives, the real spark setting this town on fire financially. 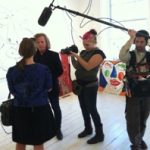 We’ve seen evidence of how New Orleans’ film industry is exploding, putting it at #3, behind only NYC and Los Angeles. Pretty impressive for a scrappy little town.

Yesterday we met with the police chief, and high level representatives from the Mayor’s office and the school system. Our group lobbed tough questions at them, questions about the crime, education, and economic development. But they, too, were well prepared, in sync with their answers. All painted a rosy picture, a bright future for this community. “We’re turning this ship around.”

Not until late last night did we hear the real story of New Orleans.

Five of us boarded the bus for an early return to the hotel. It was nearly ten and we opted for a good night’s sleep instead of a night on Frenchman Street. Two among us had witnessed Katrina firsthand, one had lost everything except the clothes on her back. Both left their hometown – one for Houston, the other for NYC. Neither have returned.

As these two women shared their painful stories with us the bus driver pulled up to the hotel and parked. He put it in park, then turned his whole body around to face us and said, “If you want to hear some real stories, I’ll tell you. I drove the bus.”

He went on and on with gruesome details of how bodies were never found. He told us about the 80-year-old woman who begged to get off his bus. Every dime she owned was under the water-soaked mattress in her flooded home. He got almost angry as he spoke of the political corruption that prevented the city from getting its fair share. This man had so much he wanted us to know. He wanted us to know the real story of this town.

We asked him the same questions we’d asked the Chief of Police. We asked him how he felt about the new charter schools, the new initiatives happening around the city.

His answers were optimistic too, but in a very real way. This man, our bus driver, filled with passion for his city, shared with us the most compelling, the most real, the most unpolished story about how his city survived one of the most horrible events ever to hit our country. He expressed cautious hope in the new city leaders, in the new charter schools. He shared his ideas for how the leaders could improve the problems.

I hope those in power, the thought leaders of this city, will listen to the ideas of bus drivers and teachers and empower them to tell their story. I pray they’ll include the shop keepers and the those who starch their shirts.

Because it’s those folks who’ll really sell this great emerging gem of a city. They are the ones who’ll take the real story far and wide.