One of the most inspiring messages I’ve ever heard comes from Steve Jobs’ commencement speech to the 2005 Stanford University graduates. One sentence strikes close to my heart each time I hear it. He says: 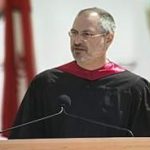 “ . . . getting fired from Apple was the best thing that could’ve ever happened to me . . . the heaviness of being successful was replaced by the lightness of being a beginner again, less sure about everything. It freed me to enter one of the most creative periods of my life.”

He ends his thoughts with, “sometimes life’s gonna hit you in the head with a brick. Don’t lose faith.”

Listen to his entire speech. It’s so worth your time.

{ 11:56 }  He goes on to say that “death is very likely the single best invention of life. It is life’s change agent. It clears out the old to make room for the new.” He tells his audience that no one wants to die. “Even people who want to go to heaven don’t want to die to get there.”

Steve Jobs speaks of dying in the physical way. But I translated his words figuratively. There are so many habits, relationships, ruts in our life that need to die, to be buried. We live in the same house too long. We rarely venture out of the neighborhoods we live in. We drive to our jobs the same way day after day after day. We need to let some things die so that new life may enter our souls.

“Even people who want to go to heaven . . . ” Most of us aim for joy, grace and love – or heaven – but we’re not willing to take risks, possibly lose our comforts – or die – for it. I wonder why?

Thank goodness God pitches those bricks at us every once in a while. It hurts like hell. But once you get up, brush yourself off . . . what lies ahead is beyond what you ever imagined.