I learned in my class last night that I needed to start naming my blog posts with “keywords.” As you probably know keywords are terms you might Google to find specific information. Since I doubt anyone would type in “Day Seventeen,” I’ll be forced to pay more attention to the titles.

I hopped on the subway a little past 7 this morning and took it to the last stop on the island, South Ferry. From there I ventured over to Wall Street and just hung out til 9:30 when ‘The NYSE Bell’ was rung. I have been told that our Mayor of Atlanta, Kasim Reed, rung it today. (Just learned he ran the closing bell). 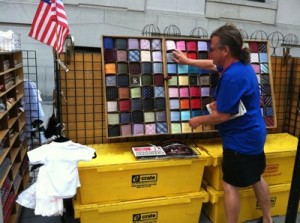 Once out of the subway, I knew I was in the right place. Lots of suits, starched white shirts, street vendors selling power ties, men having power breakfasts at every corner, a big Brooks Brothers store, plus a huge police presence. American Express, Chase, JP Morgan, Moody’s . . . all the signs spelled Financial District.

I found a lot of interesting tidbits to share. Nowhere else in the city have I seen such a large concentration of Asian tourists. There were hundreds. I heard no French, German, Spanish, no other language. I also found it ironic that the J. P. Morgan building that faces the NYSE now flies a China Sonangol flag (they do global oil, gas, and mineral investments).

To give you a little history, the J. P. Morgan building was built in 1914 and was known as The House of Morgan. For years it was known as the most important address in American finance. So, for a Chinese flag to fly over this historical building  . . . hmmm.

I also learned that on September of 1920, a bomb exploded in front of the bank, killing 38 and injuring 300. A warming note was found in a nearby mailbox, but after 20 years the FBI rendered the case inactive without finding the guilty. Today, I saw heavily-armed police stationed in front of that same building – they are there every single day, all day long – as a result of a similar incident, 9/11.

Then it was up Wall Street to Trinity Church. I’ve always been intrigued by fonts and ligatures used on old headstones, so a stroll through the cemetery was in order. I was quite moved as I watched a postman walk up to Alexander Hamilton’s tomb, take off his cap, put it across his heart and pause for a few minutes. He then placed it back on his head and off he went. The anniversary of Alexander Hamilton’s death was just two days ago, July 12th, 1804. Amazing what all he accomplished in his 47 short years.

All that said, if you ever have the opportunity to visit this area, you MUST go to St. Paul’s Chapel. It sits behind Trinity Church on Broadway and Fulton. Built in 1766 it is the oldest surviving church in Manhattan. The prayer service following George Washington’s inauguration was held at this church. Even more impressive was the work they did following 9/11. (read more about my experience during the World Trade Center attacks)

Their sign reads “During the post-September 11 ministry, volunteers lined the perimeter of the Chapel with cots. Recovery workers stumbled into the Chapel after grueling shifts at Ground Zero, looking for a place to rest for a few hours before returning to ‘the pit.’ After arranging a wake-up call at the volunteer desk, workers fell asleep on the cots. During the wee hours of morning, snores from the sleeping workers softly echoed throughout the Chapel.

Each day, volunteers changed the sheets and blankets and placed a stuffed animal on the pillows. They worked diligently to make sure the cots were always ready for tired workers.” You must visit this sacred place. It’ll change you.

Back home, work, then attended a very interesting NY Video MeetUp at the headquarters of AOL. Another great day in NYC.

A striking resemblance to George: 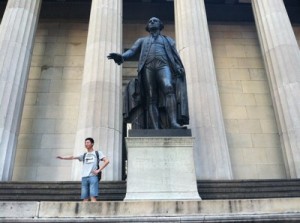 Market must be down:

Styles are a bit more starched, pleated, ironed and pinstriped than in The Village: 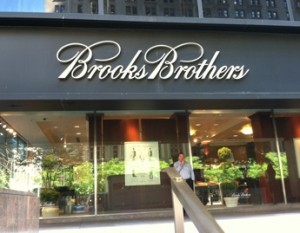 . . . and a less expensive version of starched, pleated, ironed and pinstriped: 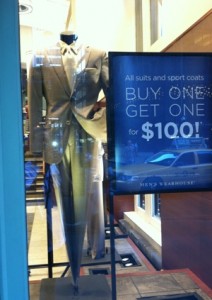 There’s a joker in every crowd: 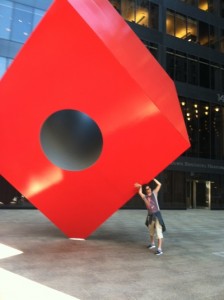 All I will say is, ‘I wish you could have heard his accent:’