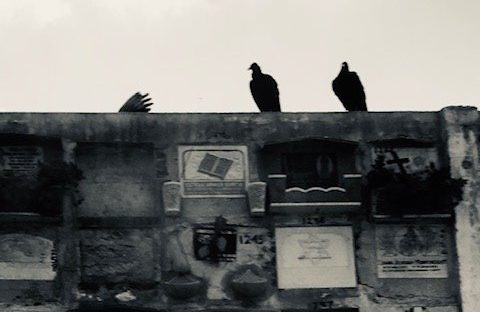 16 Sep Children of the Dump

Phew. Let’s just say, I steeled myself for the poverty I might see yesterday, but I was not at all prepared for the lessons I would learn.

At 8am, all thirteen of us loaded the van for our hourlong drive back to Guatemala City, and to the city dump. When a guard stepped into our bus, I got a strong hint of the danger we’d be facing.

As we arrived into the city we were asked not to use cameras out the open windows, both out of respect for the villagers and also, not to tag our van as a target. Therefore, I have very few photos to share today. We stopped at the organization’s medical clinic, picked up a second guard, then wove through the city’s large cemetery until we found a vantage point to look over the city dump. We were forbidden to bring any electronics at all.

My first view was a sky full, I mean hundreds, of huge black vultures, circling overhead. Our group walked behind one of the large tombs, where we could see hollowed out cubicles. I assumed the graves had been robbed. Our leader pointed out that people now sleep in them.

Then, the dump. Oh, I so badly wish I had photos to show. It was a large, 2-mile area of land, with terraced levels of cascading trash. There was a continuous ribbon of dump trucks, one after the other entering the site, people scurrying behind them, all around them. I was so afraid someone would get run over.

In 2005, when people actually lived inside the dump area, a fire broke out and the only option was to let the fire burn itself out. Two thousand people lost their lives. Since that time the government forced the people to move to its perimeter. On any given day there are 3,000+ people on working on site. Eighteen is the minimum age, but it is quite common to see children much younger working alongside their parents. Our leader told us the story of mothers bringing their babies, keeping them into cardboard boxes while they worked. Cardboard boxes with lids on them so they’d be protected from the buzzards.

The city is divided into zones, and each truck is marked with the zone in which they collect garbage. The “pickers” know which trucks come from the upscale zones, so they race to claim those trucks. The first one to touch the side of the truck gets first dibs of the garbage. And they all respect that.

Picking through trash has become quite the industry, employing thousands of people, supporting entire communities. Food vendors set up in the dump to feed the pickers. Plastic, metal, and copper buyers set up just outside the dump. Entrepreneurs find clothing and appliance parts they can resell. For many of these people, picking is their only option. Most have little or no education or skills and their only other way to feed their families is to steal. Or, the gangs, who hang around like vultures, waiting for another prospect.

Organizations work with the government to clean it up, to improve conditions, but there’s no magic, overnight solution. 3,000 jobs would be lost. In this community “picking” is considered a respectable job. Children of pickers are proud of their parents, proud that they work hard to stay away from gangs.

And there’s a very strong sense of community among these people. I could hear the words from my cousin Sandy, who’s traveled the world, working with communities such as these. “The people who have the least many times have the most because they are not connected to stuff but to each other!”

Oh, such a lesson I learned.

To learn more about Safe Passage, the incredible organization that hosted us, please click HERE.