Between Michele and I we had just enough knowledge of the Spanish language to figure out what the sign said. “Nobody likes ugly women.”

That’s what started our magical mystery tour of the day. It began as my sister, Michele, and I started out by heading toward the fish market. We’d read somewhere that we should arrive early before the smell took over. It was only 4-5 blocks from our hotel–we left in plenty of time.

Along the way, we wove in and out of ramshackle market stalls propped up against the buildings. Men sold their wares–mostly machine parts, old mixers, new work boots, and used life jackets. It was such a rudimentary way to make a living. We lily-white gringos stuck out like sore thumbs, most don’t mosey into their world, I’m sure. They were cordial and probably just as curious about us as we were about them.

We watched as one man sliced off a side of a coconut, poked a hole in it, then drank the water out of it, “The nectar of the gods,” he told us then he insisted on pouring some in our cupped hands so we could try it. Another man agreed to let us take his son’s photo when we made the connection between his son and a sticker on the side of his SUV parked nearby. “Angelito a Bordo,” translated to “Little Angel on Board.” 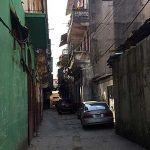 We walked street after street, up and down, through some slums, by several pool halls and bars, observing life of the poor, probably the majority of the people who live in this old part of town.

Then we happened upon Antonio. As we came closer to read his sign, Michele pointed to it and laughed, gesturing that she understood. He stood at the open window of his machine shop full of men and together we all shared a nice laugh.

He told us that his father had opened this nautical repair shop 48 years ago. He now owns it, and most of the six employees have been working here for 30-35 years. He is very proud of the fact that his shop is well-respected by the bigwigs in town. He rattled off several dignitaries whose boats he had repaired. Though I tried my best, I still could understand only about 50% of what he was telling me.

A big reformation began about 12 years ago, he told us. He took us down the street so we could get a clear view of the large Trump Tower and the other skyscrapers that had sprung up along the skyline. He was very proud of his hometown. 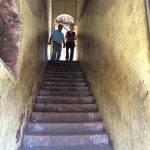 He then invited us to follow him up a stairwell which led to rooms above his shop. We followed with much trepidation. Not quite sure where he was taking us, and for what reason, but we followed.

At the top of the stairs he disappeared into small, dark quarters then came out and waved us in. Michele and I walked into a room that held 9-10 people all crammed in a small room about 12 x 15 feet. He took us immediately to the small balcony that presented a stunning view of the skyline. He had seen the fancy camera that hung around Michele’s neck. He wanted to make sure she got the best possible angle. 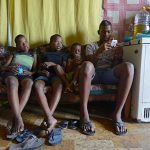 This dark room held a small couch and a single bed. A ladder led to a loft where the other beds were housed. On the couch sat four boys, all very polite and quiet. A young mother who looked no older than 15 or 16, was nursing her newborn.

The mother and grandmothers, both leery about our intrusion in their home, sat on the single bed opposite their boys, watching over their flock like eagles. As we stumbled through our broken Spanish they warmed up to us, to the point of allowing Michele take photos. 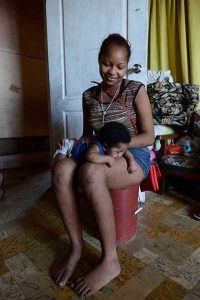 I’ve not seen this type of poverty in a long time. I hope the reformation that’s happening in this country not only draws tourism but also bolsters families such as this one.

Today changed my perspective of this town. I challenged myself not to equate poverty with crime. I started seeing more of the beauty in this place  and the people who live here – and less of the decay. It was a great day. I can’t wait for tomorrow.

* Since writing this post, I read in an American Airlines In Flight Magazine article that Panama’s economy is growing at a faster rate than China’s. I also read that this country’s literacy rate is now at 98%.