21 Sep The Stories in a Cemetery

Yesterday may have been my favorite day in Paris. 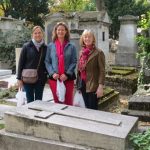 My two Atlanta friends and I decided to hike from our apartment to the Pére Lachaise. We had tried the evening before to go to this famous cemetery, but got re-routed due to a problem in one of the train stations.

Although the distance seemed a bit overwhelming, all of us could stand to walk off a few of the chocolate croissants we’d inhaled, so off we went.

This cemetery was breathtaking from so many angles. The structures, the history, the ligatures on the tombstones, the landscape and flowers.

This 110-acre burial ground sits on the highest point in Paris. It contains 70,000 tombs, all ranging from years 1804 to the present. Architecturally, there is everything from elaborate sepulchers and tombs to glass walls and metal sculptures. All reflect the personality of the deceased and the families left behind.

Each day I’ve been here in Paris, there’s been one little snippet of a story that has stood out in my mind. Today’s happened while we were in the ‘crématorium’, or columbarium, as we may call it in the States.

An unusual sort of fellow came over and spoke to us, gesturing to follow him. His hair was long and flailed in the wind. He was shabbily dressed, none of his clothes quite fit. A disheveled, mad professor type.

He spoke fairly understandable English, but his words and hands flailed about in a staccato manner. Because I hesitated for a moment, he came closer and tugged at the red scarf tied around my neck.

Heck, what could I lose? We were in a public place, in broad daylight. There was a cute young Russian couple with him plus Katy and Claire were nearby, although they were giving me the eye.

This little curmudgeon of a man led us from niche to niche, showing us where celebrities’ ashes were stored. He shared a quick story of each.

But Maris Callas’ story was clearly his favorite – he shared with us her story with such animated passion. 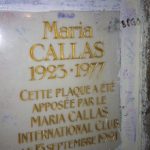 If you’ll remember, she was one of the most renowned opera singers of the 20th century. She was known for her long, tempestuous love affair with Aristotle Onassis. Even after marrying the prized Jackie Kennedy, Onassis and Callas’ relationship continued and as many report, it deepened. Maria Callas died of a heart attack just two years after Onassis died. Or, as this little man told us, “she died of a broken heart.”

Oh, next time I come to Paris, I will surely return to this most picturesque burial place. I’m going to look for this little man. He obviously has some great stories that I’d love to hear…and he’ll most happily share with me, I’m sure.