“Oh, those Stapleton women!” It’s been a phrase I’ve heard passed around my father’s side of the family for years. The Stapleton men – 4 brothers in all – were all solid citizens, serious, soft-spoken men of few words. A very respectable crew. But they all up and married fun, spirited women, each with an incredible sense of humor.

We have an off-spring in the next generation that has broken the mold. My cousin, Freddie from Texas, inherited his Mom’s sense of humor. Guess you’d say he got the best of both sides.

Here’s what he sent me last night. I am copying it word for word, without written consent and without any fear of getting sued. Hell, he knows I don’t have a pot to pee in!

I know that you know that I am sort of a redneck and somewhat of a country bumpkin from Texas, but I just want to make sure that my cousins are aware of the pitfalls that might befall y’all in France.  Y’all both are innocent little Americans from the deep South and the wilds of New England, even though you might think you are world travelers and experienced in the ways of the world.  I have been to France, and I know better.  Even though you both can hold your own with red blooded American men, I just want to make you aware of some things about French men that you might not know.

First, French men are obsessed with the anatomy of American women.  Them two guys that used to be on Saturday Night Live, well, they were French.  That’s why they always talked about big American breasts.  I mean, Hell, what other country in the whole world has a city in it named Brest.  And, that’s why they wore those tight pants so their “packages” would show.  Real men wear Levis, cause they hide their packages.  That’s something you don’t want to walk around showing off.  You won’t never see one of them “Frogs” wearing Levis.

Now that you know that the men, if that’s what you want to call them, are preverts, you need to know this:  The Eyefull tower is named that because of the American Tourists who are women who go to climb up it wearing mini skirts.  The French men follow close behind (little play on words there) to get an “eyefull.”  Lots of girls don’t know that, but it is true.  If you go visit the Eyefull tower, don’t wear a mini skirt, and don’t let one of those guys get behind you.

There is a French phrase that you may hear that you need to know about.  It is “menage a tois”.  If some of them French men says that to y’all, he don’t mean that he wants to take you to dinner at three o’clock.

If you go to a bar over there, you might hear the words “pousse cafe”, pronounced poose cafay.  That don’t mean that you have wandered into a gay bar – a pousse cafe is a fancy drink.  There is also a wine over there that is called “Voulez Pousse”, pronounced voolay poosay, so if you hear that, it don’t necessarily mean that you are getting propositioned.  However, if you have the choice between the two, a Voulez Pousse will not get you drunk as fast as a Pousse Cafe, as it is all different kinds of liquor and will probably make you talk to Roy and Earl on the big white phone.

Finally, remember this.  French men are not as sexy as they think they are.  They all suffer from prostate problems, as they are always saying wee wee.  They smoke them fruity smelling cigarettes cause they never brush their teeth.  Some of the “artsy fartsy” ones smoke them cigarettes that smell like burning rope, but don’t let one of them convince you to have a puff.

I will send you more advice as it comes to me, but just remember to have a good time and come home safe. 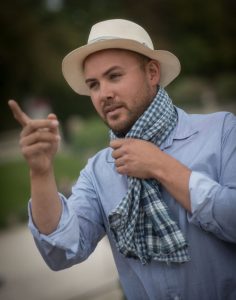 So, the last thing I told my sister as she left this morning for the market, “If you see a stall selling bread, take a look at the twin men selling it. They are drop dead gorgeous.”