Phew. Traveling is not all a bed of roses especially when you’ve got dirty laundry. 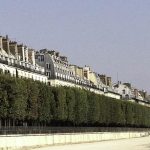 Yesterday I spent the entire day strolling through the 1st and 2nd arrondissement. There is such an air of elegance about these neighborhoods. The first holds the Louvre, the Jardin des Tuileries and the Royal Palace – it’s where the elite live and play.  It spills seamlessly into the 2nd which is home to the financial district – where the elite work. These arrondissements are crawling with tourists, all with their iPhones held high in the air, taking photos of the grand edifices and fashionistas on every corner.

It was Tuesday and I was delighted to find the Louvre closed. I’ve trudged through that immense museum once in my life, back in 1974, catching the Mona Lisa plus the other 34,999 pieces of art. That was enough for me.

I visited the Pont des Arts, a bridge that spans both banks of the Seine. It’s famous for holding thousands of padlocks – most with the couples’ initials – symbolizing their love, forever locked. Some padlocks were quite artistic, others were actually pre-engraved. Others, like this sweet Romeo’s, was particularly endearing. 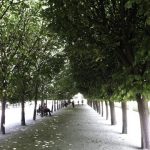 From there on to my favorite spot, the gardens of the Royal Palace. It’s not a highlight in most tour books, but I love this park. Two rows of trees that lock at the top form the most beautiful setting for a picnic. Close your eyes and you can almost see the aristocrats promenading down this lane, the ladies’ gowns swishing from side to side.

And then on to the Les Halles, a modern 4-story mall, all under the streets of what was historically Paris’ central marketplace. Yes, this shopping center comes complete with an 8-lane Olympic pool, two different movie theaters, a children’s playground, plus a full gymnasium. Not to mention 27 stores catering to just women’s fashions. I found Starbucks’ bathroom to be worth the steep cost of that cup of coffee.

The real shopping delight was not in the mall but just steps outside. E. Dehillerin, an old hardware-style store that sells every imaginable cooking utensil know to man, was apparently Julia Child’s mainstay. 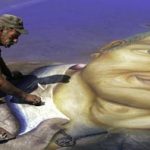 Everywhere you turn in Paris, there’s a surprise. As I rounded the corner back at the Louvre, I found a Renaissance-style street artist painting a lovely chalk portrait on the sidewalk. And as I turned to leave, I had to chuckle at this visual oxymoron – he was quite shrewd in social media marketing. 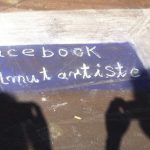 With what little energy I had left, I walked along the Seine, down below street level (or “quais” as it’s called) back to the subway station. With lovers embraced on almost every bench along the way, it was further evidence that this city has earned its title as ‘the most romantic city in the world.’

But, a damn French washing machine ruined my perfectly idyllic day. Who knew you were supposed to close the ‘porte intérieure’, the inner gate – with a ‘click’ – before you put the top down? Tell me.

After 4 hours of ‘Southern-niceties’ that aren’t worth a toot in France, we have decided that the clothes stuck in that damn machine will just stay in that damn machine. They aren’t worth us wasting any more time hassling with the appliance repairman who never came, the landlord who accused us of overstuffing her machine, nor the leasing agent who never returned our calls. If they don’t want to come help us they can deal with the towels in there. They should be good and moldy by the time the next renters come.

No rude French woman is gettin’ my goat.

What did I learn? When renting an apartment in Paris, or anywhere else in the world, make sure your landlord or leasing agent speaks good, clear English. Address with him/her how problems will be solved and who will cover the expense. Make sure you pay by major credit card so you have some future bargaining power. And most importantly, be tough.