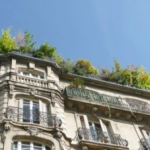 My sister found this place, negotiated a great deal. It’s perfect. My home away from home is situated in the 4th arrondissement, Le Marais, known for its skinny streets, bustling cafés and shops – and is described as a somewhat congested neighborhood.

‘Congested speaks to me. In my mind, it means ‘electric.’

From what I read, it appears that Sundays are probably when the Marais is at its liveliest as it’s almost the only spot in Paris that’s open for shopping.

One blogger reports, “One of my favorite cafe in the neighborhood is Le Loir dans le Theiere, rue des rosiers, where you can sink into the sofas or armchairs and eat fabulous pastries.”

Another says, “Le Progres, very traditional bar and cafe has a great terrace and is so perfect for a coffee and croissant in the morning.”

It only gets better, “. . . you’ll find a burgeoning daily flower market, where you can buy just about any type of flower, and oddly enough a range of exotic tropical birds.” 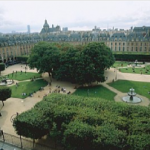 The crown jewel of this arrondissement – the Renaissance square of Place des Vosges – was built by Henry IV. You may remember him as the King who had a wife plus a mistress who bore him three kids. Guess he had to build something large enough to keep them separated.

The 4th was once the jewel of the city. It went downhill and not until the 1960s, when I guess the hippies moved back in, did it become hip. Now it’s considered the center of Parisian artistic and cultural life. 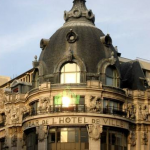 The apartment is described as, “Newly re-decorated, next to the elegant Place de Voges, perched on the 7th floor of a splendid Parisian building with an elevator. Luminous with stunning views of all the major monuments in Paris.  . . . washer, fridge, deep-freezer, micro-wave, boiler, coffee machine, hair-dryer and a fully equipped kitchen.” Hopefully the internet speed is good.

But this is the best:

“Great views from the windows, including the Eiffel Tower, Notre Damn, La Defense, the list goes on!”

Must have had a bad day in the confessional.