I smiled as I read her words. “France boasts 2,500 bookstores, and for every neighborhood bookstore that closes, another seems to open,” she observes. Very few Kindles and eBooks in this city.

My mind wanders back to the last time I was in Paris. Our hotel sat only one block away from Shakespeare and Company, perhaps the most famous bookstore in the world. Unfortunately, I never went in. 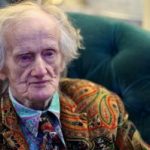 George Whitman opened this tiny bookstore in 1951. Not quite ready to return home after the war, Mr. Whitman wound up in Paris where he rented a small hotel room and enrolled in Sorbonne to brush up on his French. As he studied, he began collecting English books, eventually transforming his little room into a library and bookstore. His friend, Lawrence Ferlinghetti, convinced him to acquire a small apartment – a place to house his books – opposite Notre Dame, in the heart of Paris on the Left Bank. Over the last 60 years, this little apartment, now bookstore, has become an institution, a sanctuary for writers, aspiring writers and artists.

The upstairs library is a wonderfully unique space, lined from floor to ceiling with books that are part of Mr. Whitman’s personal library. The room is ringed by an old wooden bench with cushions that comfortably seats 30 or so people. In this room they hold weekly readings, free of charge. They invite literary groups to share their work and encourage aspiring writers to get feedback on their budding stories or poems. It’s also been in this room that Mr. Whitman has invited visiting authors and students to stay and sleep while working in the literary world.

This little bookstore is yet another example for us – how one man’s simple, little dream has encouraged the dreams of so many others.

Thank you, George Whitman. I look forward to coming to your home in September.

George Whitman died this past December (2011) at age 98. He went peacefully upstairs in the room above his bookstore.

Born on December 12, 1913, Whitman, who claimed to be a distant relative of American poet Walt Whitman, was raised in Salem, Massachusetts.

After graduating with a degree in journalism from Boston University in 1935, he set off on a 5000km journey through Central America, much of it on foot, that instilled in him a passion for travel.

Seems like the two of us have a lot in common. I, too, hope to get to Central America one day – to walk the streets of El Salvador – a place where I spent my childhood.