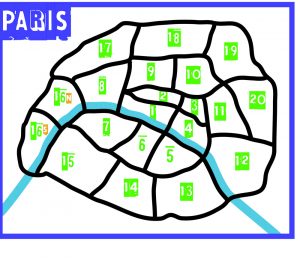 The wonderful city has 20 neighborhoods, better known as arrondissements. Starting with #1 at the city’s center, each neighborhood spirals out in a clockwise direction. The 20 areas are bound within a perimeter. Here’s a quick synopsis of each:

Arrondissement #1, or Louvre as it’s called, is the most sparsely populated because it holds most of the city’s historical sights – the Louvre, The Royal Palace, Tuileries Gardens and Vendôme Square.

Arrondissement #2, or Bourse, is mostly business. The former stock exchange and the historic National Library are in this area . . . the smallest of all neighborhoods. Lots of shopping arcades here.

Arrondissement #5, named Panthéon, but most often referred to as the Latin Quarter, holds the Sorbonne University and the Boulevard St-Michel.

Arrondissement #6, or Luxembourg, is home to one of the world’s greatest parks, the Jardin du Luxembourg. The oldest abbey in Paris also rests in the 6th.

Arrondissement #7, the exclusive Palais-Bourbon, holds the Eiffel Tower, Napoleon’s Tomb and several museums including the Musée d’Orsay. Thousands of tourists, needless to say.

Arrondissement #8, or Élysées, is loaded with tourist attractions. The Champs-Élysées (probably the world’s most famous boulevard), the Arc de Triomphe and Grand Palais.

Arrondissement #9, or Opéra, is known for its spicy red-light district, Pigalle and the Moulin Rouge.

Arrondissement #13, or Gobelins, is also mostly residential. Paris’ largest Chinatown is located in this arrondissement.

Arrondissement #14, or Observatoire, is a lively neighborhood historically linked to great artists and writers like Hemingway and Jean-Paul Sartre. The cemetery where many famous French citizens are buried, Montparnasse, is located here. The Catacombs can be accessed from here – at the Denfert-Rochereau Square.

Arrondissement #15, or Vaugirard, is the largest of the 20, both in size and population. Paris’ tallest skyscraper, Tour Maine Montparnasse, is here.

Arrondissement #16, or Passy, is considered the richest. It borders the Boulogne, an enormous park.

Arrondissement #17, or Batignolles-Monceau, is the one deemed ‘diverse.’ It borders the infamous Pigalle ‘hood to the north and houses a large convention center in the west.

Arrondissement #18. Then there’s Butte-Montmartre, which surrounds the Sacré-Coeur basilica. In this neighborhood is also the Place du Tertre plus it borders the 9th’s Moulin Rouge.

For those of you who followed my walks through Manhattan, you know that I look for the unusual. There is plenty written about the tourist attractions so I look forward to finding the ‘real life’ in Paris. If you know of any such places, events or other info, please leave me notes below in the comment box. Merci!