In the 30 years I’ve lived in Atlanta, I’ve passed over this bridge dozens of times, never once considering what lies below. I can’t say where the bridge is because if the world knew, the residents here would lose their homes.

As I walk past a man’s home, I can see through his front window, right into his bedroom and kitchen. His bathroom and den are open to all those who walk by. But no one goes by his house because it happens to be under the bridge. It’s not where most of us go. In fact, most of us are afraid to go anywhere near.

I walk by casually, keeping my distance the same way I would walking down any other street in an unknown neighborhood. I would never walk up to a stranger’s home, open the front door and let myself in. So I extend the same courtesy to the people living beneath the bridge.

This man’s home is like any other home in Atlanta. The bed is made. His briefcase and shoes lined up neatly, just as ours are in our homes. We share the same taste in artwork – I love graffiti, too – and his walls are covered in it. I’m a bit jealous because he’s probably on a first-name basis with several of the graffiti artists.

His books and Monopoly game are neatly packed away in plastic crates, just like the ones most of us have in our basements. He’s got his hurbie-curvie packed full, just like the ones alongside my street. And like many others in Atlanta, this resident loves his evening cocktail. 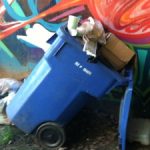 This man’s home is underneath a bridge because something changed the course of his life. Something significant. I don’t know what it was, but it’s not unlike my dear friend and neighbor Aidan. She lost her young son just this week. Neither she nor the man who lives underneath the bridge will ever be the same. Their lives are forever be changed because of something significant. They have much in common even though they live in opposite circumstances.

No one in this world is immune to suffering. Rich, poor. Black, white. Everyone shares pain and suffering. But we also share joy and hope, dreams and goals. Perhaps the desired result varies, but the experiences are not so different.

So let’s take a walk around this unique circle together. Let’s share our stories and realize it’s not much that separates us. Maybe, just maybe, we’ll even begin to understand one another.  And who knows, I might decide to take this man a casserole and see if he’ll walk with me down the tracks of the Atlanta Beltline. Won’t you join us?