I walked through this neighborhood a few days ago. I’d heard it was and up-and-coming area but couldn’t really see much to photograph and write about. But its name, Hell’s Kitchen, intrigued me.

You’ve gotta love anyone who lives in this area – they’ve got to have a certain edginess about them. Can you imagine telling your mother that you were moving to New York, to a neighborhood called Hell’s Kitchen. “Oh, you know, Mom, where West Side Story was filmed.” Right.

This neighborhood is on the west side of midtown, spanning between 8th Avenue and the Hudson River. The cross streets start at about 34th or so on up to the 50s. To satisfying my curiosity, I did a little research and found this neighborhood association website that tells a bit about the colorful history of the area (www.hknanyc.org):

“For many years, Hell’s Kitchen was famous for its fights. From ax-handle arguments over clotheslines to race riots, violence was a way of life. The area’s name itself speaks volumes. No one can pin down the exact origin of the label, but some refer to a tenement on 54th as the first “Hell’s Kitchen.” Another explanation points to an infamous building at 39th as the true original. A gang and a local dive took the name as well. The truth is difficult to uncover, since the West Side was peppered with menacing nicknames like Battle Row and the House of Blazes (where arson was a favorite form of entertainment), so Hell’s Kitchen was just another way of describing a place that was hotter than hell. The expression was possibly an import: a similar slum also existed in London and was known as Hell’s Kitchen. Whatever the origin of the name, it fit. Hell’s Kitchen was troubled by violence and general disorder from an early point in its history. In 1851 the Hudson River Railroad opened a station at West 30th Street, and the development of the railway brought factories, lumberyards, slaughterhouses and tenements to house the numerous immigrant workers. Poverty and close quarters bred ill will between neighbors, and riots erupted between the Irish Catholics and Protestants as well as between the Irish and African-Americans. Eventually, gangs such as the Gophers and later the Westies ruled the streets. Hell’s Kitchen also served as an appropriate setting for one of the most famous gang rivalries of all: the Sharks and the Jets in Leonard Bernstein’s West Side Story.”

Most of the buildings are old, many need sprucing up. Apparently there is a code restricting buildings to six stories. Although a few pop up higher and shinier, most are old, walk-ups, and somewhat ‘dusty’ feeling. It’s a community in transition . . . Which means real estate prices are still reasonable. HA! HA! HA! Average list price for this ‘hood is $977,125. That might get you 800-900 square feet. That sounds VERY reasonable, doesn’t it, rest-of-America?

Since I’d not gotten any photos earlier in the week, I walked back through last night. I’ve never seen so many restaurants in one square mile in my life. Every single one of them was bustling, packed with young people, all celebrating TGIF.

My impression of this community was definitely changed. So glad I went back for a second look! 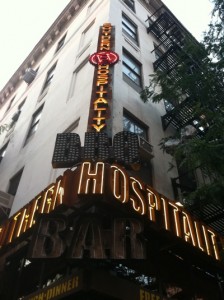