You would. I just grinned from ear to ear when I saw this spray-painted on the bottom of a lamp post. I can only imagine what motivation was behind this, can’t you?

I worked all day, again, inside. It was okay because it was terribly hot outside plus I needed to continue financing this magical mystery tour. I finished at about 5:30pm but was not ready to call it a night. 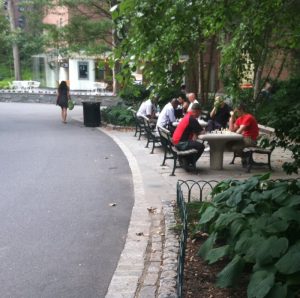 Out I went toward the east side, the neighborhoods of Stuveysant Town,  Alphabet City, Knickerbocker Village, Cooperative Village, Two Bridges, and Lower East Side. I jumped on the L Train to its last stop in Manhattan, the 1st Avenue exit.

First view out of the subway was a massive apartment complex named Stuveysant Town, or as residents call it, “Stuy Town.” Its 80 acres of aging red-brick buildings circled an oval central park. The entire area was sprinkled with trees, young people on tennis courts, kids kicking soccer balls, men playing checkers, you name it. According to Wiki, this community has 35 residential buildings with 8757 apartments. I was quite surprised to find that 1-bedrooms apartments start at over $3500 for this diverse, working-class neighborhood. Not sure how they make ends meet. 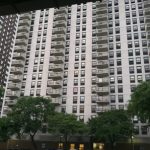 Through a little research I found that the next area is often used to film scenes in Law & Order. I walked literally blocks and blocks of massive towers, mostly public housing developments. Although the bohemian crowd is moving in, this area still has a leftover sense of poverty and crime.

These buildings face the East River but are cushioned by a long strip of land, mostly utilized as ball fields (all bustling with Little Leaguers, joggers and soccer players). I stopped and watched one of the 6-year-old Little League games and just laughed inside. New York is no different from the rest of the world. The dads were all lined up on the fences, giving their sons signals. 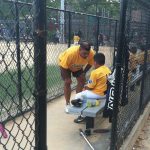 The moms sat on the bench, oblivious to the game, all chatting with each other. And when the game was over, neither team knew who had won or lost the game. They all knew what a great time they’d had that evening! 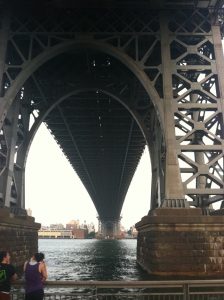 Over the course of my evening, I walked under three huge bridges that all spanned the East River – the Williamsburg, Manhattan and Brooklyn bridges. There was a flurry of activity as I approached the Williamsburg bridge – a helicopter circling and police pointing up at the huge steel supports of the bridge. You could see a piece of cloth waving in the wind. Apparently the police had mistaken the cloth for a person who might be contemplating jumping. (just found a New York Times article to explain what happened here )

I stopped at 9:30 when I got to Pace University. There was a Starbucks at the corner and a hot cup of coffee was just what the doctor ordered. I had walked nearly four hours so my feet were aching.

I got to see a different slice of life tonight. It’s because of this diversity that makes New York so delightful. 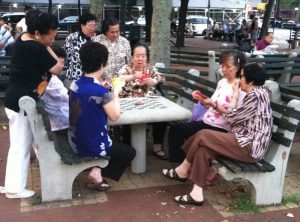 Came upon this group of Asian women playing a serious game of cards. Not sure who the older woman is in the middle, but she was holding court!

A little research shows that this area has spawned some of New York’s best graffiti artists and rap musicians. 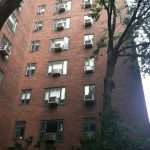 So many of New York’s older apartments have no air conditioning. You’ll see rows and rows of A/C units hanging out of windows. It’s been a brutal summer here so they are all running…but only at night. Many, including my landlady, are concerned about the high power bills that follow. We take it for granted in the South!

First Little League coach I’d seen with dreadlocks down to his waist!

Enjoy your day. I certainly am.