I’m an Air Force brat so as you can imagine, I grew up in a very patriotic household. We put out the flag each morning and took it down each evening before sunset. On Veterans holidays we visited our military cemetery. I choke up every time I hear the national anthem at a football game. So walking up to the Statue of Liberty on the fourth of July was no different. Tears welled up in my eyes as I thought of my Dad, Col. John H. Stapleton, and other men and women who risked and gave their lives to ensure my freedom.

Although I promised not to do any tourist-y things while in New York, I agreed with Michele who suggested we spend our Fourth of July visiting the statue. She had bought tickets in January that allowed us passage to the top, the crown. Three hundred and fifty-four steps later, I was definitely glad we climbed to the very top. 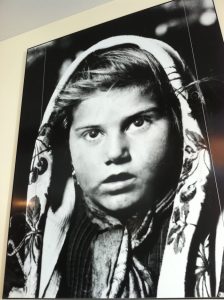 Hanging on the walls were large photographs of the many men, women and children who came through the doors of Ellis Island. This young child caught my attention.

But I must say our next stop at Ellis Island was the most moving. All around me I heard German, French, Spanish, Chinese, and other languages I couldn’t identify. For a moment I imagined myself being among fellow immigrants who were in line to be questioned, checked for diseases and processed. Yes, here I was ~ just like my forefathers ~ living my dream.

I called my Mom in search of a name of a distant relative who had come through the gates of Ellis Island. “Angus Campbell,” she recalled. “He came from Scotland and married a McLean girl.” It had not seemed important to know that fact until I stepped into the massive ‘Registry Hall’ of the entry building at Ellis Island. All of the sudden it became very personal, critical that I know.

I loved seeing all the red, white and blue:

This young lady was a member of a group of young people chosen from all over the world to tour America: 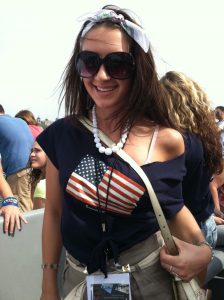 This delightful family, all wearing US flag shirts, were visiting New York from New Hampshire: 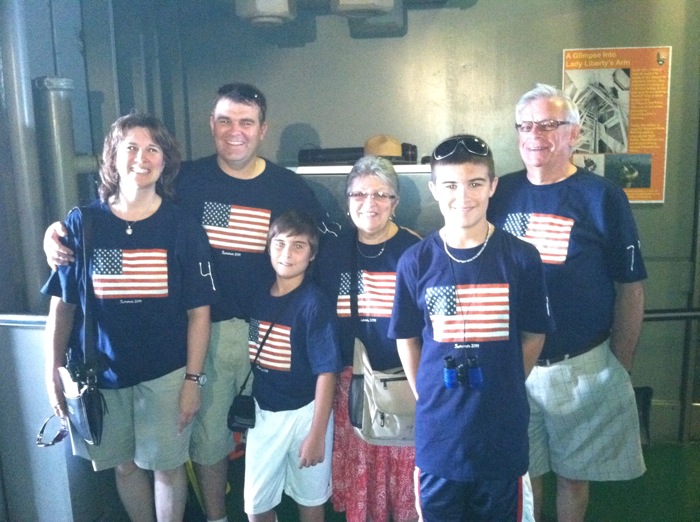 Even carried the flag proudly! 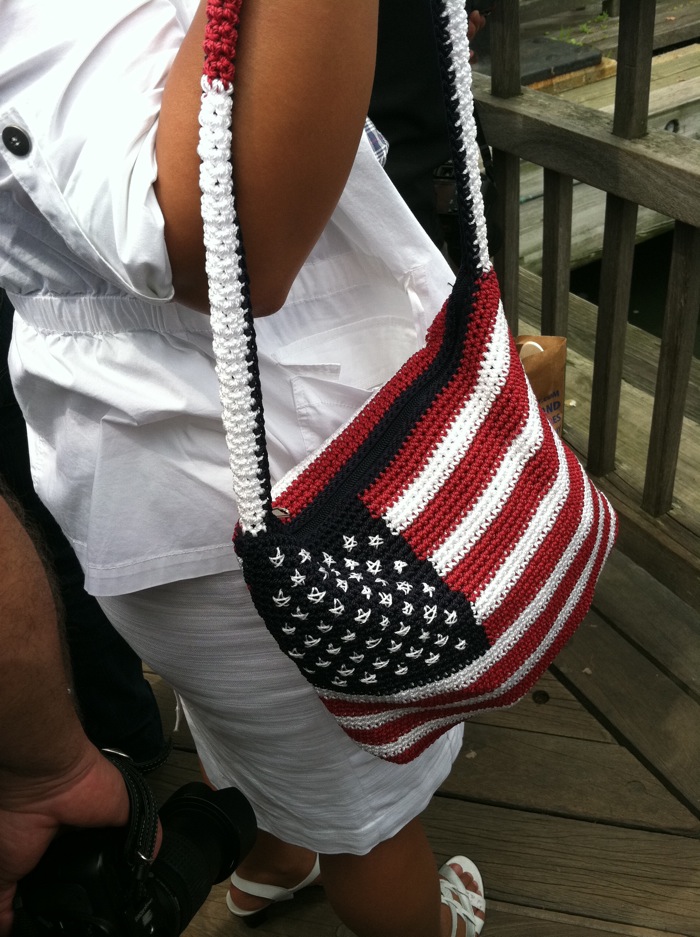 The lines of folks waiting to get on the boat headed to Ellis Island: 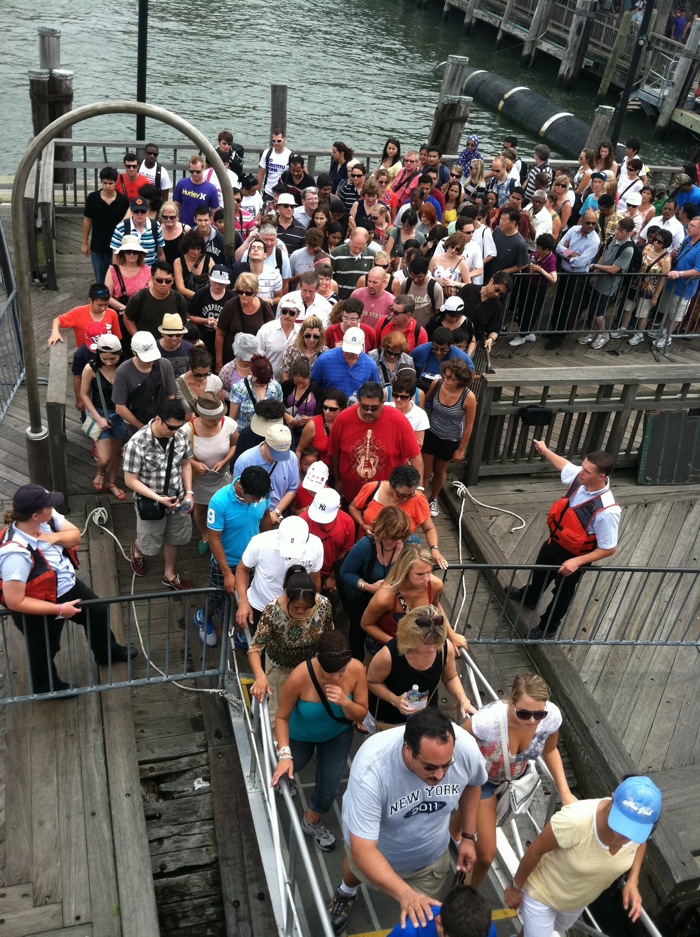 Inside the Great Hall of Ellis Island. You can just imagine the souls who filled this room. 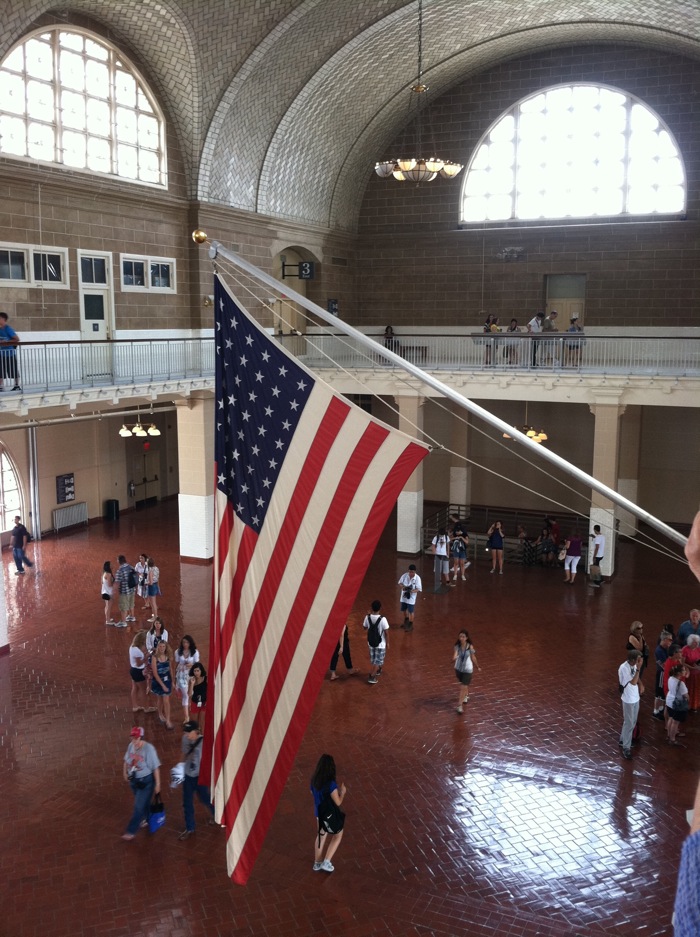 Trunks brought by immigrants. Many came with only the clothes on their backs:

My sister, Michele Stapleton ~ a Maine photojournalist ~ shown cramped in the crown of the Statue of Liberty. Enjoy some of her NYC photos on Facebook. 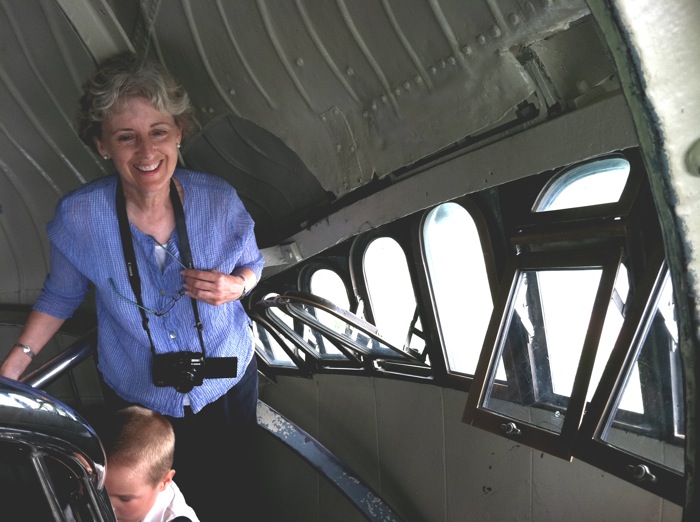 And finally, see the video of these amazing young men at Battery Park. It’s a tad long but SO fun all the way til the very end. Turn up the volume and enjoy > Street Performers on YouTube

Hope you had a happy Fourth of July. I had one I shall never forget.

Celebrating the 125th year of the Statue of Liberty . . .

Some interesting facts: The copper ‘skin’ on the Statue of Liberty is only 3/32-inch, about the thickness of two pennies.

From the ground to the top of her torch, Miss Liberty measures 305 feet and 1 inch.

When it was set atop its pedestal in 1886 it was not only the tallest structure in New York City, but also the tallest statue in the world.

On January 1st, 1892, Ellis Island opened as an immigration station. Fifteen years later, on April 17, 1907 a record 11,747 immigrants arrived in one day. Today, 100+ million of us can claim ancestors who came to this country through Ellis Island. Daunting, isn’t it?