Why is it that I always find myself in the middle of historic events. I was in Memphis when Dr. Martin Luther King, Jr. was shot. I was in France when their president Georges Pompidou died and I was shut out of the country when the 9/11 disaster occurred. Now I’m in New York as the governor signs into law the same-sex marriage law.

I got up early this morning. Tried to stay put, but by 6:30 I could no longer force myself to stay inside.

First thing I noticed when walking were all the wreckers towing cars. I saw at least 2o or so before I stopped and asked a policeman why and where they were taking all the cars. He informed me that the Pride Parade was scheduled for later today so they needed to clear the streets. He assured me they were moving the cars just a few blocks away, not far. There’ll be some testy people when they wake up and find their cars missing! 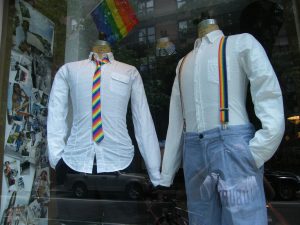 As I walked the streets I noticed the Pride colors everywhere. Rainbow flags, rainbow-colored men’s ties, cupcakes, flags, umbrellas, everything. The Michael Kors window displayed two beautiful wedding cakes decorated with two grooms on one and two brides on the other. Rainbow colors everywhere!

All this was in preparation for what would be a celebration like I’d never seen before.

After a late morning nap I ventured out for the parade which began with a moment of silence for those lost to AIDS or victims of a hate crime.

Once thing I love about New Yorkers is that they are open to differences, they embrace change and they celebrate personal freedom. In the crowd were preppy straight folk, bejeweled transvestites, gay and straight politicians, parents with their children–people from all walks of life, all out supporting their gay friends and the new law.

I left the parade a bit early. It was hot, steamy and the crowds were so thick I began to worry about getting out in time for my class at the Apple Store. It took me over an hour to get even close to a subway station. By that time I was too late to make the class.

One of my daughter’s good friends who is here with a summer college class invited me out for dinner. We had a ball – ate at a neat little restaurant in Chelsea. The music was blaring so I immediately asked the waitress to please turn it down because there were old people in the restaurant, for Pete’s sake! She did and Caroline and I had a delightful evening together.

Below are photos from the parade. Like I said, there were people from all walks of life at the parade. I just caught some of the more ‘photogenic’ ones!

onlookers at the parade

folks from all walks of life were there.

wish I was in the wedidng business in NYC right now!

The day ended with about an hour of fireworks. It was quite a celebration in the East Village of NY. I’m so glad I was able to be part of it.

{Today reminded me of the late 60s. I clearly remember people of color were not allowed the same rights as my family. Women were not allowed to preach from a pulpit and ‘stay-at-home Dads’ were frowned upon. Maybe one day we’ll understand that God made us all in his image, no matter if we’re white or black, gay or straight, Methodist or Buddhist. Hopefully we’ll see that our differences are what make this world so great.}