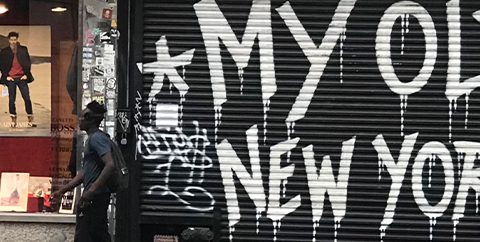 Yesterday was a very unproductive day. For three hours I sat in my little cubicle, my mind on everything but my manuscript. At 6pm, I finally gave up and decided to walk. Eighty-two blocks later, I finally got home.

You know, when you get old, you get really introspective. You finally learn to take life just a little slower, and to savor the simple things, like cool mornings and the chirps of birds. That’s why I enjoy walking so much. When I travel outside of a car or train, I can stop to see things, to smell and hear them, to photograph them, and scribble down the details I don’t want to forget. Many of the sights awaken me, intrigue me, some even anger me, but they all force me to see people like I’ve never seen them before. Some break my heart, while others bring me joy and make me laugh.

As I stepped out of my writing space, and onto 14th Street, I chuckled at the young woman who passed beside me. Tattooed on her left calf was a large retro typewriter, a red heart typed on its paper. “Oh, another aspiring writer,” I thought and to which I related. But it disheartened me to see the words on the bookbag she carried. “Faith No More.”

A bronze-skinned psychic sat at the corner just a few blocks up, a cigarette teetering on her lips as she spoke into her phone. “Love, Money, Career” were the three topics she promised to cover in her readings. I was tempted to stop for one, but I already knew how those three things had worked out in my life.

A large, gruff, unshaven man hauling a huge white bag, ambled his way through a crowd. Clink, clink, clink, I could hear, imagining that he sold cans for a living. How easy I have it, I thought as he passed by, his stench overpowering.

Two 20-something girls dressed in all black. Sleezy tops, and shorts showing rear-end cleavage. They strutted in four-inch spiky heels. One turned back to the man following them, and in her raspy cigarette voice hollered, “Let’s duck into the first bar we see.”

Then, there was the middle-aged woman, dressed in a pretty flowered dress. As she approached me, I heard her say into her phone: “Son, you’ve been grounded for three months and you still haven’t stopped.” Oh, God. I remember how hard it was raising teenagers. “Just be patient,” I wanted to stop and tell her. “You’ll be so proud of him one day.”

A short Asian man, 70 or so years old, flexing his muscles for a photo. Behind him stood a 7- or 8-foot Hulk. A robust version of Wonder Woman appeared, a bleached blonde clutching a wad of bills. When she demanded payment, the Asian man walked away, looking baffled why he should pay for a photo. Times Square, of course.

Leaving Times Square, with its neon American flag and all the tacky souvenirs, my skin felt like it was coated in cotton candy.

A man plopped down in an empty chair, then started in on the woman beside him, sitting alone. “I’m collecting money for my son’s high school band,” he started, holding up a laminated board with multiple photos. Like so many of us, she wanted to believe. She pulled out a dollar and gave it to him, then added, “Bless you.” I suspect she knew better.

Passing the Trump Hotel, I noticed three bellmen, standing alone, spotlighted by the bright lights. They looked like targets to me as I wondered if they feared for their lives, each day as they came to work at a place so many would like to bomb.

A young woman, her body terribly misshapen by some birth defect. Crumpled in a dusty wheelchair, she was one of five or six in what looked like an art class, in the park drawing pictures of the statue. I marveled at her spirit. How hard her life must be, yet her mahogany hair was perfectly groomed, her fingernails painted, and her lipstick a beautiful pink.

An old man squatting up against the building, smoking a joint. The smell was nauseating.

All the doormen I passed as I walked the Upper West Side, one after the other, all perfectly starched in black and white. I imagined theirs to be a lonely job, as they all peered through the wrought iron bars and into the dark, empty streets.

And finally, the one that hurt the most, the one I can’t seem to forget … a man lying on the pavement. His face pierced with 20 or so silver studs, his hand out, palm up, holding a few coins. Dead asleep, I hoped. Not dead. All I could think was that he was someone’s son.

Oh, so much to be learned in those six or seven miles…so much to humble me, to stop me from making judgment, and to remind me every day to be grateful.