Navigating this town is hard. Well, let me clarify. Not having any knowledge whatsoever of the language makes getting around a tad difficult.

Luckily, street names are listed on the signs in both Chinese and English. And luckily I have Apple’s map app on my phone (remember Google Maps is censored) plus a paper map, both in English. I’m okay if I’m walking, but if I show a cab driver either map, they can’t read the English. One even hollered at me, “Engly!!!!! Méiyou (which means no!)” So my workaround is a card with the name and address of my old hotel pre-printed on it, in Chinese. If I can get a cabbie to drop me there, I can walk the three blocks to my apartment.

This is my first experience in a country where English is so rarely available. Except in tourist areas, which I avoid, menus are usually in Chinese, as they should be. Some have photos, some not. Some have numerals for their prices, others not. Last week, my friend Casey and I found a restaurant inside a 4-story furniture mart–a place so cosmopolitan that surely we’d find someone who spoke English. But no, and as we pointed to a few things on the menu, our waiter raised his eyebrows, looking quite perplexed and asked what seemed to be, “Are you sure?” We nodded and agreed we’d deal with whatever the outcome. When he returned we quickly understood. We’d ordered enough food for 10 people. Luckily, the Chinese have takie-outie containers. 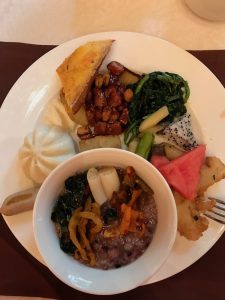 I’ve tried my best to stick to foods indigenous to this region. I did slip in a slice or two of bacon, but generally I’ve stuck to Chinese fare. My breakfast the other morning included a savory porridge with toppings, chicken bowels (sausage), dragon fruit, bean curd flower, Szechuan chicken with peanuts, kugel, vegetables . . . and my beverage, bean milk. If you ask for water it is served hot, not cold as in America. Oftentimes I’m not 100% sure what I’m putting in my mouth, but so far the food’s been phenomenal, even at the tiny holes-in-the-wall.

I continue to be enthralled by the Chinese way of life. While here I’m living in the French Concession area where most buildings are at most three stories. Outside this area most of the residential buildings are high-rises. It’s mind-boggling to compare the 14.3 million people who live in this one city to the 10 million who live in my entire state of Georgia. There are so many people stacked on top of each other, all crammed into such small living spaces. It takes seeing it to remind myself of how much we have in America. 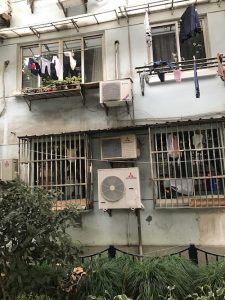 Last week as my friend Casey and I rode through the Jing’an district, near the Monastery of the Jade Buddha, I remarked about their lack of quality construction. She explained that Chinese craftsmanship was shotty at best. I was shocked, especially for people who are so incredibly precise about their arts and crafts. A workman installing a new heater will just poke a hole in the outside wall—of her “luxury apartment”—and run the wire inside, she told me, not worrying about the appearance, nor patching it up so cold air won’t leak around it. I then made a snide remark about all the laundry hung outside the windows and to that she said most of the washing machines only use cold water. The clothes are then hung either outside or just inside a large picture window, the belief being that the sun actually cleans the clothes. Then she pointed to the cages on the smaller windows, similar to our burglar bars. She explained that in the winter people freeze their fresh vegetables outside, the cages preventing them from falling from those high porches.

There are other bits and pieces of differences I find interesting…like the cable and electrical bills. Here you put down a certain amount of money and when you’ve used up your air time or wattage, you put down more money. There’s no monthly billing. I guess that’s because the postal service is not at all reliable according to Casey. Cash is the most common means of paying, not by debit or credit cards. It’s not uncommon to see people pulling out big wads of cash and counting it out to pay. Unlike in other cultures, there are no places of worship on every corner. I’ve seen two temples (both tourist spots), an international church plus a Russian church, but that’s about it. And I cannot go without mentioning THE SCOOTERS! Professionals, all decked out in suits, drive them to and from work. Dads pick up their children from school on their scooters, unfortunately with no helmets, the youth text while ‘scooting’ and I’ve even seen a woman flying down the street with her large “poodle-ish looking” dog perched on the seat behind her. 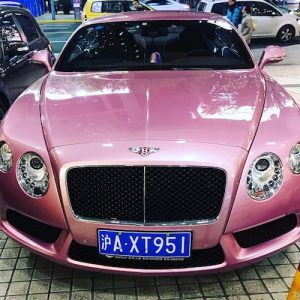 My first day here I spoke of the opulence. Yes, there are parts of Shanghai I’d describe as “New York on steroids.” So much bigger and much more grandiose than even Fifth Avenue. The window displays are magnificent. The topiaries like nothing I’ve ever seen. The beautifully-tailored clothes, the shoes, the make-up, the hairstyles…all so fashionable. But I’ve now wandered through the other sides of the tracks. Lots of poorly-built shacks, electrical wires haphazardly hung between then, the trash piled up…it’s raw poverty like I’ve never seen in America.

Their standards of living and ways of life may be vastly different from ours, but the Chinese people I’ve encountered have been very genteel. I have felt very accepted and safe here. Other than the cabbie who was a bit gruff, most have been extremely accommodating and kind to help me navigate my way around. A shop owner gave me a taste of three different oranges even before knowing I’d buy anything. A woman got up from her table and helped me find silverware at a restaurant yesterday. The Culture Square ticket agent was so patient and tried her best to communicate in English for me. I can’t say enough about the people here.

But the children, oh, the beautiful children . . . they’re the ones who’ve truly stolen my heart! (see video on Facebook)