Life in China has not been a total bed of roses, let me assure you. This apartment has one of those interior mounted heating units which are quite common in many countries I’ve visited. 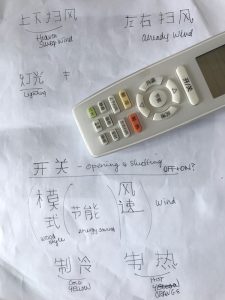 The problem is that all the buttons on the remote are in Chinese. Luckily I downloaded WayGo, a visual translation app before I left. It works fairly well, but when one translation came back as “Heaven Sweep Wind,” I was stumped. I can only use my imagination to assume that it means the heat blows skyward. All that to say I froze last night. Never did figure out the damn heat.

This morning I ventured out to stock my kitchen (aka get coffee). As I left my apartment and walked through my little compound, I could hear lots of activity through the open doors and windows. A woman was outside her apartment, peeling leaves off a cabbage and placing them into a large pot. Mushrooms and a fish head were laying on the table in front of her. Making soup, I supposed. Another woman was bent over an outside utility sink, scrubbing what looked like a fleece jacket. 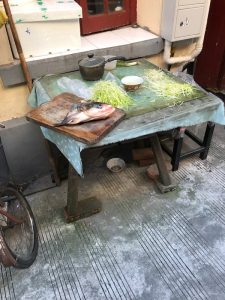 Both of them older and just chattering away. I assume they do their laundry and food prep outdoors because there is so little room inside. But maybe it’s just an excuse to be neighborly. 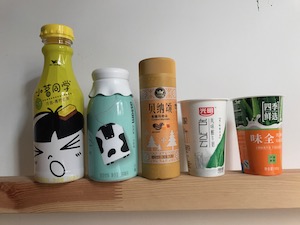 Once outside the gate and on the street I found a small store which looked much like our zippy marts. Floors, ceiling and walls were all white and immaculate. The coolers had beer and sodas just like ours, and the shelves were stocked full of snacks, candy and chips, none of which I recognized. I found some instant Nescafe, the standard brand over here, two cups of yogurt and a bag of vegetable snacks, then was good to go. I then stopped at my fruit stand for some fresh Mandarin oranges, my newest love!

Manning the stand was a young man with a baby. He was rocking him, talking to him, and he grinned ear to ear when I made an adoring gesture. I’ve noticed what seems like a lot of involvement of men with their children, and grandparents as well. A few days ago my friend Casey pointed out the folks outside the local kindergarten, waiting to picking up their children. All but one or two were men, dads or grandads. Yesterday as I walked through People’s Square I saw several grandparents pushing their grandchildren in strollers. Very sweet. 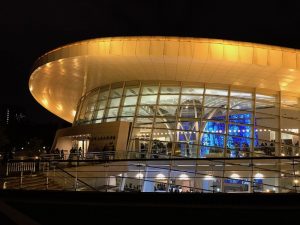 After a good cup of coffee I took on the day with no destination in mind. My first surprise was the Shanghai Culture Square, an architectural wonder. The Blue Man Group, a troupe I’ve always wanted to see, was due to perform tonight so I bought the very last orchestra ticket available.

Further on I came up on IAPM, a mall I’m sure many of you’ve read 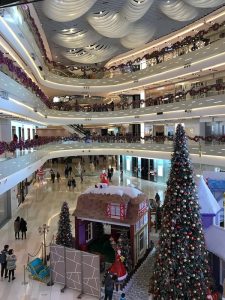 about or seen in photos. Four or five stories of all the famous designer shops, window after window of the most gorgeous clothes and purses and shoes you’ve ever seen. Got a bad case of the wants, but kept walking. Oh, their Christmas decor…

And then lunch at a place I happened upon, called Hot Pot. If I had any food experience at all I’d bring this restaurant to the States and franchise the devil out of it. As you enter the front door, to your left are two cases of what appears to be an amazing salad bar. 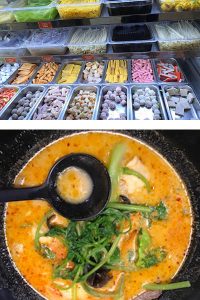 Every mushroom you can imagine. Greens of all sorts, fancy jelly meats, seafood balls, eggs—boiled, fried, of hen or quail. Noodles of all shapes and sizes plus rice cakes. “Perfect!” I thought, I needed a good salad. I filled a big bowl, took it to the cashier to be weighed and paid him twenty yuan (about $3). The cashier picked my bowl off the scales and turned and handed it to the kitchen staff behind him. Stunned, I took my receipt and moved to the side trying to figure out why I couldn’t have my salad. I then glanced at the tables beyond me and noticed that everyone was eating soup. What I’d thought was a salad bar turned out to be a soup bar and, perhaps, the best meal I’ve had since I’ve been here. I’m going back tomorrow. 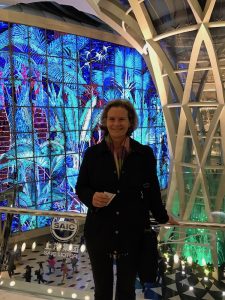 After taking a nap I began to obsess about going out alone tonight, after dark. The Culture Square was only four blocks away which seemed safe to walk at 6:30. But at 9:30, after the show, wasn’t so sure. Then I worried about coming into my little ‘compound’ at night. I just imagined the light would not be optimal. Although I almost backed out, in the end I was too curious both about the Blue Man Group and the theatre building itself. I am SO glad I went.

My walk home was lovely and extremely safe. Lots of people on the street. Shops are still open, even my fruit stand guy is still working. I sashayed through my little ‘hood and up my stairs. Got home just fine and am now enjoying three little tarts I bought on the way home.

This trip has been such a gift for me. I can’t even begin to tell you how thankful I am for this opportunity.

Am not able to post photos on this blog so please go to my Facebook page and look at the photos of the Shanghai Culture Square, or Google it. I was pretty when I saw it in daylight, even more stunning when all lit up at night. And the show. Just wow!