Not good. Four days in this intriguing city is way short of what it’ll take to really see it. 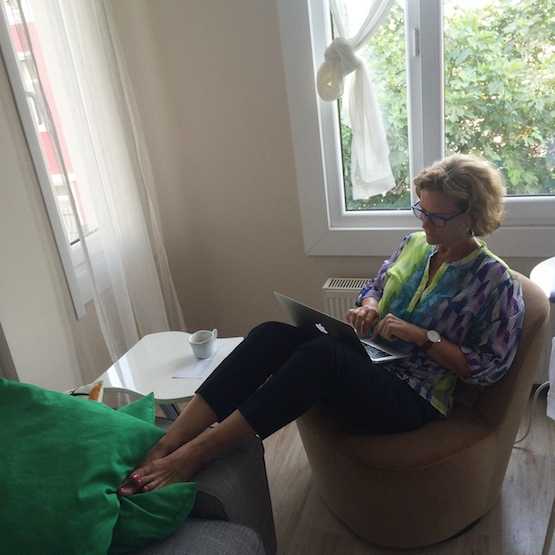 We had just gotten settled in our apartment. With the front windows open, we were enjoying the breeze and watching the sun set over the Sea of Marmara when we heard a man’s voice begin to chant over loud speakers. It was shortly after 8:30pm so we finally came to the conclusion it was the imam reciting the last prayer before the sun went down – or the last prayer before people could eat. It’s Ramadan here, the holiest month of the year in the Islamic religion. Those Muslims who are devout in their religion fast from dawn until sunset, for a full thirty days.

At first this voice echoing through the neighborhood made me a bit uneasy. I’ve never before heard a voice of authority broadcast over an entire town. My mind flashed back to old WWII movies, scenes of loud speakers warning townspeople of planes about to drop bombs. Maybe I was a bit on edge because of the recent bombing just a mile from here. But after digesting the significance of tonight’s announcement, I was relieved and anxious to see what was to follow.

It was rumored that the real activity started at sunset – when people could finally eat – so my sister and I set out to explore. As we walked down the cobblestone alleyways, now totally transformed with colorful lights, music, and delicious smells, we did our best to dodge the hawking restauranteurs and shopkeepers. One salesman caught us, though, and we patiently listened to his pitch. When we finally convinced him that we were not buying a moonlight cruise down the Bosphorus, even at the expense of missing belly dancers and all the wine we could drink, he gave us a good tip. He pointed up to the hill ahead and suggested we partake in the evening’s events at the Sultan Ahmed Mosque, or as coined, “The Blue Mosque.” 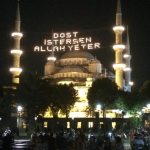 Sultanahmet (The Blue Mosque) lit up for Ramadan 2016. 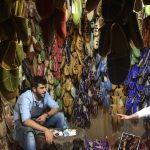 Another craftsman in the fair outside the Blue Mosque. 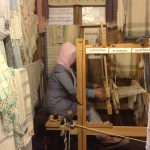 During Ramadan, many craftspeople come and set up booths. 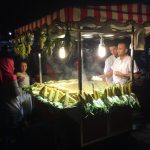 Roasted corn on the lawn…after the day’s fast.

Wow. This historic mosque is quite majestic – and even more spectacular when dressed for this yearly event. Thousands milled about its grounds, the tone a bit hushed for such a large crowd. Some seemed totally entranced spiritually, but for others, an air of celebration. Some families picnicked on the grounds, chattering over the imam’s constant chanting over the loud speaker. Others sat on benches, their iPhones hoisted in the air, capturing the light show that illuminated the mosque’s great dome and six minarets. As the night wore on there was music, food vendors selling everything from gelato to grilled corn, plus a bustling craft fair under a large tent. Their version of the Red Cross even had a large tent set up, with people lined up on beds, donating blood.

I tried hard to liken the atmosphere to one in the United States. It felt most like our Fourth of July. Families and friends eating together, the fireworks, music – very much of a relaxed holiday.

Although it was almost 11:00pm when we ordered our dinner, the wait staff didn’t seem to mind at all. It was Ramadan and no one seemed to be slowing down. Add to that, Germany and Poland were playing in the World Cup – and until that game was over, no one was ready to call it a night!

This is truly a magnificent city. So vibrant, so colorful with history, and I feel so fortunate to have the opportunity to catch a glimpse of it.

(pls excuse errors. It’s almost 3am and too tired to proofread!)