{ One day per month each member in my Facebook group, #GenFab, posts an article on a common title. We then bundle our pieces together, share links and drive traffic for each other. February’s topic is “Celebrity Crush”. Here is my contribution. }

Not sure if it’s the long-sleeve black turtleneck or the Levi’s 501 jeans. Maybe it’s the old sneakers that float my boat.

Most women fall in love with good-looking stars like George Clooney and Denzel Washington. I swoon over a tech nerd.

A few years later I read John Sculley’s book, Odyssey: Pepsi to Apple. That’s when I became obsessed. Mr. ‘Wingtip’ Sculley criticized Jobs for his non-linear corporate culture. How could a bunch of scraggly creative people and engineers sit around a circle on the floor, in their jeans, spending hours batting ideas back and forth be operationally efficient, Sculley asked?

I thought Jobs’ plan was brilliant.

An advertising creative myself, I so wanted to work for him. Since that wasn’t in the cards, I tore out all of his ads, brought them into the office, taped them to our purple conference room wall, and instructed my jeans-wearing, floor-sitting staff that we were NOT to let any work outside our office that didn’t rival the edginess of Apple.

“Don’t fight the system,” “Well, that’s the way it’s always been,” are nauseating excuses for cowardness, in my opinion. Jobs never settled for status quo. He bucked the system, he had that ‘bad boy’ attitude toward The Establishment.

I loved that about him.

In 1997 he and his ad agency came up with the all-time best campaign, “Think Different.” Like you know the lyrics of your favorite song, I can still quote every line in the TV spot “Here’s To The Crazy Ones.”

I am transformed every time I watch that video.

Steve Jobs, the consummate entrepreneur, infused his spirit into those around him. His aura, his energy spilled over into those who worked for him, those who invested in Apple, and those who bought his products. I still get pumped with healthy energy when I read about him, when I watch his speeches, when I surround myself with people as electric as Steve Jobs. (And let’s be honest, don’t we all get a big rush when we walk into an Apple store?)

I also admire a man – especially one so powerful – who will admit publicly that he is vulnerable. In the famous speech Jobs gave at Stanford University in 2005, he said being fired from Apple was the best thing that could have happened to him. “The heaviness of being successful was replaced by the lightness of being a beginner again, less sure about everything. It freed me to enter one of the most creative periods of my life.” And he added, “I’m pretty sure none of this would have happened if I hadn’t been fired from Apple. It was awful-tasting medicine, but I guess the patient needed it.”

Ya gotta admit, not many can hold a candle to Steve Jobs.

Despite being worth billions of dollars, I admired Steve Jobs because he was determined not to let money ruin his life. He lived in a sparsely decorated, modest house (by Palo Alto standards, of course). His garden had no walls and he didn’t even lock the front door, according to a close friend. He shunned the celebrity circuit, balked at the prices of clothing and on Halloween, went all out for the neighborhood kids, decorating his garden with fog and thunder machines.

Steve Jobs was the real deal.

In his book, Sculley tells how Jobs lured him out of a secure, lucrative position at Pepsi with this question:  “Do you want to sell sugar water for the rest of your life, or do you want to come with me and change the world?”

This innate genius not only recognized his God-given talents, but he took ownership of them. He used those tools to change the world. Yeah, we are all born with divine gifts but most of us make excuses why we can’t use them. Me included. “Wish I could afford to, not enough time, can’t because …” Steve Jobs blew every excuse out of his way and plowed right through them, indeed pushing the human race forward at break-neck speed.

He placed a great importance on his spirituality, again bucking political correctness with his choice of religions. He stayed true to his beliefs in both his personal as well as his business life.

I love that in a man.

Yeah, I know. Steve Jobs was a demanding perfectionist, sometimes petulant or abrasive. He refused to meet with investors. He allowed atrocious working conditions in his factories in China. He lied to Steve Wozniak. And gave no money to charity. Used LSD. Ok, maybe he wasn’t as perfect as I make him out to be.

But Steve Jobs was my hero. If I had to pick one person with whom I could spend an entire day, it would him, hands down. 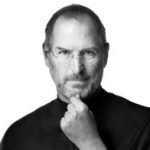 “Here’s To The Crazy Ones. The misfits. The rebels. The trouble-makers. The round pegs in the square holes. The ones who see things differently. They’re not fond of rules, and they have no respect for the status-quo. You can quote them, disagree with them, glorify, or vilify them. About the only thing you can’t do is ignore them. Because they change things. They push the human race forward. And while some may see them as the crazy ones, we see genius. Because the people who are crazy enough to think they can change the world – are the ones who DO