Back in NYC, Ten Years Later 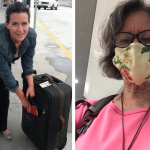 I landed at LaGuardia a little before 9:00am on Sunday. I’d rather arrive bleary-eyed than give up a single minute in this city. Outside the airport, I climbed onto the Q70 bus and headed toward the Roosevelt Station, where I planned to buy two hot tamales from a street vendor who sells them from her “food truck,” an old rusty, grocery cart. My plan was to tuck them into my purse, ride the subway to my hotel, drop my bags, then enjoy my breakfast–quite ceremoniously–in the most wonderful little garden behind a church in the West Village, St. Luke’s in the Fields. This little enclave holds a special significance for me. It was there, ten years ago, that I penned the most difficult blog post I’ve ever had to write.

Unfortunately, my tamale lady was nowhere to be found. The health department probably shut her down during covid. I juggled all my bags through the turnstile and then, like a pack mule, lugged them and myself down two flights of steps where I boarded the F train for a long ride to the West Village. A bit smug, I felt like a real New Yorker. I knew exactly which bus and train to take without even having to look at a map. PS: A real New Yorker would have called Uber.

Once at the 14th station, I lugged my belongings eight or so blocks to my hotel, checked them, then headed to my favorite little breakfast place for a bowl of oatmeal. There I sat, dizzy with dehydration, my feet stinging with two blisters. I questioned whether or not I had the physical strength to replicate the walking trip I took ten years ago. “Two and half weeks of this?” In that moment I felt stuck, stuck in a plan I wasn’t sure I wanted to complete. I fiddled around the Village for three hours, or until I could finally check in. I splashed some water on my face, tried to do a number on my attitude, then headed north to meet my friend for an early dinner. At 9:00pm I was dead asleep.

The next morning, I woke up hell-bent on finding a bagel and cup of coffee. I scurried through Washington Square Park, where they were shooting scenes for a TV show or movie, hoofed it past the NYU campus, and finally spotted a food truck in an area called Astor Place. I placed my order for a toasted bagel with cream cheese and a large cup of coffee with cream. “No sugar?” the man inside bent down so I could see and hear him more clearly. He had the kindest eyes and an infectious smile. “May I take your photo,” I asked, like a real idiot. 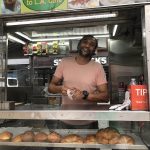 “It’s $4.70,” he said as I reached for my credit card. “Only cash,” he answered. I panicked. I had no cash, or not enough to cover my tab. “Don’t worry, it’s on the house,” he said as he waved his hand. To that I asked if there was an ATM nearby and he kept shaking his head. “No worry, you can pay me later.”

“He’s nice that way,” the lady behind me whispered. I found an ATM and came right back to pay him. I thanked him profusely, to which he answered, “Have a beautiful day, my sister.” And off I went with a huge sense of gratitude. Friends, I’ve got to tell you. THIS is what I loved about New York City ten years ago, and little moments like these are exactly why I keep coming back.

I walked the entire width of the island that morning. I saw several clusters of new, fresh-faced students led around by their leaders, all clad in the purple of NYU. Several of the kids looked shell-shocked, others eager as little baby birds. In one group a cute guy was already hitting on one of the new girls! “Gotta give it to him,” I chuckled. I watched a really old couple walking very slowly, almost painfully, hand-in-hand. She, who seemed was the stronger one, pulled up their locked fists and laid a kiss on his hand. I melted. I stepped into a large square park, where I was startled by a strong scent of urine. Ahead of me was a small encampment. A couple playing checkers at the same table where a man had laid his head. Passed out, I assumed. Another man in a wheelchair, pulled up to a table that held his possessions – cups and dishes, coffee pot, hair products, and lotions. He had a makeshift tent protecting his things. Another ranted wildly as if in the midst of a schizophrenic episode. Then I walked on, past two young shirtless men. Young kids, really. One was shooting a needle into the other’s arm. He licked his wound then looked up at me with the deadest eyes. I recognized that look. Our family had dealt with addiction.

As I neared the end of the park I locked eyes with a nice-looking woman, about 20 years younger than me. Her blond hair was neatly twisted in a bun at the top of her head. She spoke to me as I neared her, but I didn’t understand, so I walked closer. “I had a co-op, right there, she pointed ahead to a building. They threw me out. I paid all my taxes on time to the government but now that I need them, they won’t help me. I don’t have anywhere to live.” I couldn’t ignore her, so I lifted my mask over my face and sat down beside her as she went on. “I’m going to sit here and keep protesting until they give me some help. She seemed lucid, but I had no idea what her circumstances might be. Her phone rang and she waved me on, so off I went. Phew.

I walked on for several more hours and saw a lot more. There’s nothing like this city. Nothing like it at all.

I feel very lucky to be here.