I wrote this piece for a writing class four or five years ago. After listening to all the MLK tributes yesterday, I thought it might be worth resurrecting.

“Is it fair to hold OUR children back in order to let the negrah kids catch up?”

I was only 16 when I heard these words come from a teacher’s mouth. She was worried that the new busing laws would surely hinder the progress of her white students.

Although her statement wasn’t considered politically incorrect at the time, even insensitive, I knew something about those words was wrong. I didn’t dare question her. After all, I was only a child and those were the days we children were to be “seen but not heard.”

It was a steamy August evening in Mobile, Alabama, 1969. I was about to enter my senior year in high school. Busing had been mandated by the government. Zoning lines had been re-drawn. For a year lawyers had lobbed appeals at the courts, trying their best to clog up the implementation of this country’s biggest social revolution.

Like most teens about to embark on their senior year, I remember feeling somewhat unsettled about life in general. Rumor had it that my neighborhood had been sliced in half because of the new laws. One side would remain at Murphy High School. Our side would be redistricted to Davidson. But honestly, I didn’t put much stock in it. I was much more stressed about earning enough babysitting money to buy the $19 Ladybug dress I wanted for my first day as a senior.

I remember this one particularly hot, sticky evening. The summer was drawing to a close. The citronella lanterns were all staked around the back patio. I had obediently set up the card tables in the living room and wrapped them beautifully in white linen cloths. The good china and crystal were out, the silver polished. Everything was perfect except for the tension that was building. That tension reared its ugly head every time my mother threw a party.

The house came alive when the Hendersons, the Morgans, the Colemans* – plus others in my parents’ Sunday School class – arrived for Supper Club. Our minister, Dr. Edington, and his wife were included, of course. These same five or six couples had been gathering for years, each month rotating to a different house.

It was midway through the evening when I caught wind of the whispers, that something might be wrong. Their tone hushed as if to keep the truth from my sister and me.

“A lot of my teacher friends are not signing contracts, they are afraid of the violence.” My mother was a teacher at Davidson and for the first time in my life I heard fear in her voice. “I’m not putting my kids at risk.”

“The Feds are mandating we bus these kids but who’s paying for the damn buses?,” one of the men chimed in. Another felt the whole thing was an anti-South campaign, forcing cities like Mobile to take the brunt of “this hypocritical social project” while Boston, New York and Washington were being given a pass. The words “carpetbaggers” and “reconstruction” flew through the room like flies.

The room filled quickly with tones of fear and resentment. For the first time I realized something big might be happening, something threatening. Something that might actually affect me.

“Their blood is red, just like ours,” Dr. Edington said slowly in his deep, pastoral voice. A deafening silence sliced through the room, his wisdom changing the tone of the conversation. My dear father jumped up almost simultaneously. He headed for the kitchen and reached high above the stove, to the cabinet that held the liquor. He pulled out the purple velvet bag, the one that held the Crown Royal, the whisky that only came out at special times. 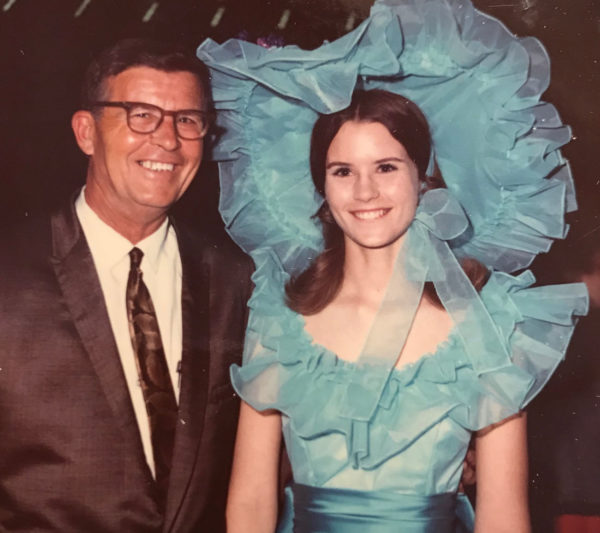 As Daddy circled the room filling the highballs, Mrs. Henderson stumbled for the right words to fill the void. “You’re right, David.” She was always the gentle one, the perfect Southern lady.

Then Mr. Morgan, the life of the party, the one who always had one too many drinks, responded to her with, “Oh, Janie, it’s a violation of our freedom of choice, it’s not the American way.”

“Those mothers don’t want their children mixed up with ours anymore than we want ours with them,” another chimed in. “Their families are as invested in their own schools as we are,” she went on. Why make a child ride a bus halfway across town? It seemed unfair to both sides.

As I type this, fifty years after the death of Martin Luther King, Jr., I believe we’ve made headway in race relations. Yes, we still have a long way to go but it seems what we’ve gained in the racial arena, we’ve lost on the political battlefield. Not a day goes by that I don’t open Facebook to hate and intolerance. Fear. The scene I just wrote about is still very present in our living rooms and in blogs and on social media.

I’m tired of it and I don’t want to wait 50 years for it to get better.

*All names were changed, except for Dr. Edington’s, one of the wisest men I’ve ever known.