In the French Concession

I arrived in Shanghai in one piece and quite rested. Having an entire row to myself on the plane allowed me to get plenty of sleep.

My first impression of Shanghai came as I exited immigration control. A man wearing a badge that read, “Airport Personnel,” stepped out from behind his counter and asked if I needed a taxi. Because of his clever badge I trusted him. But when he quoted me almost $100 for the cab ride, I knew I was just minutes away from my first scam. I found a legit driver for less than $25.

As we rode into the city I was struck at how opulent Shanghai appeared to be. Stunning architecture. All the designer stores. Lots of Mercedes and Range Rovers. Parks beautifully manicured. No corners cut when it comes to design, whether in signage, packaging, or in fashion.

I was pleasantly surprised as we pulled up to the hotel, an old Spanish-style villa built in the 30s. It was way nicer in person than its photo online, which is usually not the case. It sits inside a compound of sorts, just off a lovely tree-lined neighborhood in the old French Concession area of the city. Directly across the street is the Shanghai Conservatory of Music. 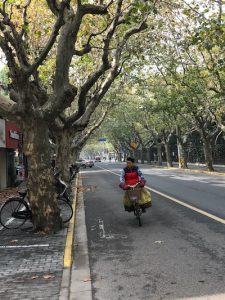 My tree-lined neighborhood, the French Concession.

As is my M.O. for Day One in a new city, I took off walking, familiarizing myself with my neighborhood, the place I will call home for the next few days. Because of the conservatory, I passed a store with rows and rows of violins in the window. Next to it was a store with cellos and another with Steinway pianos. Lots of young people milling around toting their musical instruments. The American Embassy is in this neighborhood as is the Arts & Crafts Museum and several hospitals. Nice part of town.

On I walked passed what appeared to small compounds, of sorts, or dare I call them gated communities.—one single street in the center of two rows of low-size apartment facing each other, secured off by elaborate gates. Some quite elegant. That being said, it appears my neighborhood is primarily residential. 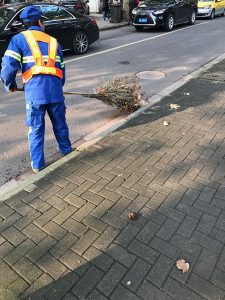 I was also struck with the cleanliness of the streets on which I walked. Not one single piece of trash anywhere. Several crews were out trimming the trees, another crew hanging Christmas decor . . . and a “real” street sweeper! Again, the attention to detail is quite evident in this city. 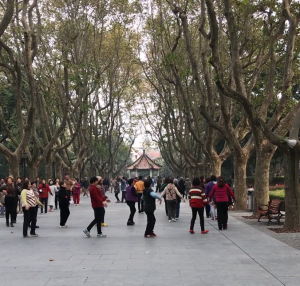 Neighbors dancing in the park, a daily ritual.

My friend, Casey, and I then ventured out for brunch. On our way we passed a sweet sight in a large city park. A hundred of so people all dancing and exercising to music. It’s quite common, Casey tells me, morning and night, for neighbors to come to their park to participate.

As we ate I drilled her with questions and was quite surprised at many of her answers. The Chinese do not use butter nor margarine. Cheese is not readily available in but one flavor and hardly ever is salt or pepper on the table. Folks here normally don’t have ovens nor bathtubs. And, the toilets–those in public places, like in restaurants and in museums–are holes in the floor. That one shut me up. 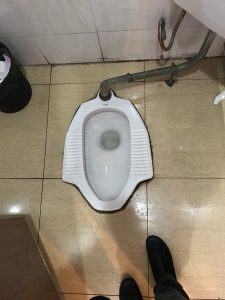 We ended our day with a cocktail and nice meal overlooking the river that separates the two parts of the city, the old and the new. Marveling at the new skyline, the one Shanghai is so famous for, with all the lights, I remarked at how surprised I was about my misconceptions of life in China. She quickly assured me that this city was not representative at all of the life outside its city limits. Quite different, she assured me.

6 Comments on “In the French Concession”