I got a strange tweet a couple of months ago. Some woman claiming to be a publicist. She said she’d read about my walks across Manhattan and was interested in publishing my story.

I was cordial, but brushed it off. A few weeks later she followed through. She had pitched my story to her client, Lee Woodruff, and they decided to feature my upcoming walks across Paris on Ms. Woodruff’s blog. 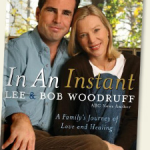 Her first book, In an Instant, co-authored with her husband Bob, the ABC News Anchor who was critically injured in Iraq in 2006, was on the New York Times bestseller list for four weeks. Her first fiction novel, Those We Love Most,will be published this September.

Yep, today I got confirmation. I’m still pinching myself. If anyone out there doesn’t believe that dreams CAN come true, you got a lot to learn.