Where do I start? I’ve got so much to tell.

One bag, girls and boys!

First time in my life I’ve ever arrived at the airport on time. Write that one down.

The night before I left was quite eventful. We had a bad storm and a tree fell, covering the driveway. Then we lost power. Couldn’t wash clothes, finish my computer work. So I was forced to get a good night’s sleep.

The flight to New York was great– slept the entire way. I had chosen a right side window seat hoping I’d get a view of the city flying in. I did. Not only did I get a great view, but the pilot had to circle around again before approach. All I could think as I looked down at this great city was, “What in the hell have I gotten myself into?” Cutting up a paper map into 22 equal pieces is easy. Seeing the city, in full size, from a bird’s eye view is a whole different ball of wax.

Took a bus into what I thought was Grand Central Station. What a “ceremonious place to arrive,” I thought. Instead the bus stopped at the Port Authority, a grimy bus terminal. I sat down with a cup of overcooked coffee to regain my composure and figure out what next.

I’ve always been intimidated by the subway system here in the city. You see Atlanta has two routes: one up and down, the other goes across. Not this red, blue, 1, 2, 3, ABC stuff. Some cross over, some are locals, others are express. Just too much for me especially today, so I decided to walk it. After eleven blocks, I hailed a cab, or two…or three, finally got one and was on my way. (Got to get in sync with these cabs. Light on means available? If you’re on the wrong side of the street, will they not pick you up?)

I was greeted by a wonderful young lady whose apartment I had rented. The hospitality rivaled that of the South. I have a lovely place, 900 sf, 130-yr old building, right in the heart of the West Village….just a few blocks from the Hudson River. Next door there’s a tiny little neighborhood bar that spills out onto the sidewalk so as I type, I’m enjoying the sounds of laughter below.

So my first walk was in my own neighborhood, the West Village. This was a great neighborhood to start in because it’s so diverse. On one side I have the Hudson River with its wonderful Riverwalk. On another side I have tree-lined streets with beautiful old brownstones. Another side is a bit more colorful with tattoo shops and “enjoyment” parlors, if you catch my drift. Plus I heard more languages today than I knew even existed.

Just today the governor signed a new law allowing gay marriage in the state of New York. So there was an air of celebration throughout the neighborhood. Bars and restaurants were packed with 20- and 30-somethings enjoying their Saturdays. Parks were brimming with moms swinging their children. The riverwalk was full of young lovers having picnics and fathers throwing ball to their sons. It struck me that in a city that moves at such a rapid pace, there were so many people relaxing and enjoying each other. It felt almost as if this city was in slow-motion. It’s contagious. (double-click the photo below. See the guy in a hammock on his porch reading a book!) 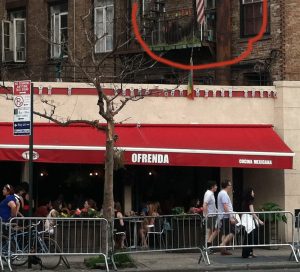 I found a nearby grocery store and stocked up on some essentials: coffee and 1/2 & 1/2, milk for the cereal I had brought with me, yogurt, and blueberries. Then I threw in some peppered brie, fancy crackers and Genoa salami. My bill was reasonable until those last few additions. I’d done better eating at a 5-star restaurant.

I thoroughly got into my walk today. So much so that I stepped over into two of the other blocks. In one of them I found a real surprise, the Tiles for America exhibit…hundreds of tiles hanging on a chain-link fence, all painted in memory of those who lost their lives and loved ones in 9/11. It’s almost midnight and I’m too exhausted to sort through those photos tonight, but promise to do so in the morning. First I plan to sleep late, fix myself a good cup of coffee and slide slowly through a thick ‘ol New York Times.

The kids are still at it downstairs partying. Wish I had enough energy to go join them. But this old sister is beat. Hasta mañana.