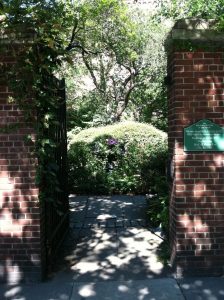 a moment of serenity

I have a bad habit of trying to cram all I can into my days. Not just on this trip, but in my life in general. The more I can do, the more I have to mark off a list. The more lists I can make, the less time I have to delve deep into my soul. You see, I’m facing some new developments in my life at the moment and I need to delve. I need to deal with the confusion of what’s behind and plan for what might be ahead of me.

So on this Thursday morning I forced myself to start off in a charming little garden that sits beside the St. Luke’s Church in the Fields ~ it was only a few blocks away. Although I could only sit still for a short 30 minutes, I made sure to thank God for the joy this trip had brought me. I prayed for little Brendan who is undergoing chemo, for my family and friends, and for the man who sat beside me. It appeared his life was not easy. Although I didn’t get much solved, it was a good thirty minutes. I should do it again.

Leaving the West Village, walking south along Greenwich Street, I could see a change in architecture . . . the pretty brownstone streets were soon replaced with rows and rows of old warehouses. Real old ones, the kind that are begging to be restored into vibrant, new loft spaces young people would inhabit. I’ve always wanted to restore an old warehouse.

On I walked as the landscape transitioned again. Taller, newer buildings sprung up amidst the old ones. So many interesting rooftop habitats (am dying to go into some of these places). One can only imagine how creatively decorated they are on the inside. 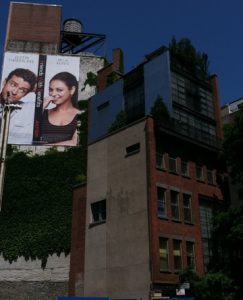 I stopped for lunch in Tribeca ~ had my first real street meal today from a Halal vendor. For $5, which include a coke (I mean a soda), I had one of the most delicious meals I’ve had in a long time. REALLY! It included something that resembled a hush puppy, but it was seasoned totally differently. (read more about sidewalk cuisine in a previous post).

I was enjoying my meal until the pigeons arrived. And folks, let me tell you, these New York pigeons are REAL aggressive. One bird came within 6 inches of my lunch and would not back off at all.

Something told me I was nearing the financial district because of all the starched white shirts walking down the street. Girls in high heels and dark suits, men with ties and their hair all in place. No tattoos and dreadlocks on this side of town.

There were a lots of voices that sounded angry, so I followed the sounds (I can hear my mother cringing right now). I sure didn’t want to miss a good story. It was a group of Verizon employees picketing in favor of allowing a union. I wish I had stopped and asked them why.

I have to laugh ~ I can now spot a tourist a mile off. Yep, I was approaching the site of the Twin Towers and the place was crawling with them, holding their iPhones high in the sky, taking snapshots of the mammoth building rising in the background. Since I’d promised to visit the 9/11 site with a friend, I held off peeking inside the gates. I’ve done a lot of research on the new memorial, but I’ll wait to post it until we have visited it.

My next encounter was probably the most interesting of the day. Six or eight protesters were camped out on the sidewalk by City Hall. They were angry about the upcoming budgets cuts against the have-nots ~ the poor, the sick, the elderly ~ and of course they cited the budget surplus and the wealth just down the way on Wall Street. It’s an age-old problem, wonder if we’ll ever solve it.

One man had been out there for 14 days, day and night. Hear what he has to say:

Then it was over to Chinatown. Ladies, you can’t come to NY without visiting Chinatown. Gucci and Coach bags. Chanel sunglasses and perfume. Burberry scarves and Rolex watches. Honey, you can be decked out, flat head to toe, for no more than $50. Such a deal. Being the fashion queen that I am, I find more interest in visiting the fruit stands and the fish markets just across Canal Street. (you’re right, Mom, I do talk a lot about food).

I could have gone on for another two hours but the battery ran out in my phone. The good news is that I got on the right train and got off at the right station. I did turn the opposite way from my apartment, but quickly realized it. I’m getting there. I really am.